The Duchess of Sussex is already there and Prince Harry is expected to join her within days. So what is it about Canada? Here is our guide to the country’s very best attractions and experiences – and why you should consider Canada for your next holiday.

For those who want holidays where you escape the crowds, Canada delivers. It is the second-biggest country on Earth but one of the least populated – there are fewer people living in the whole of Canada than in Tokyo’s metropolitan area alone. The country also has the longest coastline in the world.

Fans of Canada say its natural beauty is finely balanced with fun and sporty experiences, plus a host of urban attractions.

1. CN Tower: You’ll need nerves of steel during a trip to the top of Toronto’s main attraction. Experiences include the EdgeWalk, where visitors are attached to a harness and sent outside on a ‘no-handrail’ excursion around a 5ft-wide metal ledge 116 storeys above the ground. There is also the Glass Floor (you can walk or crawl across it while looking down 1,122ft), and the SkyPod observation deck which, at 1,465ft, is one of the world’s highest viewing platforms. 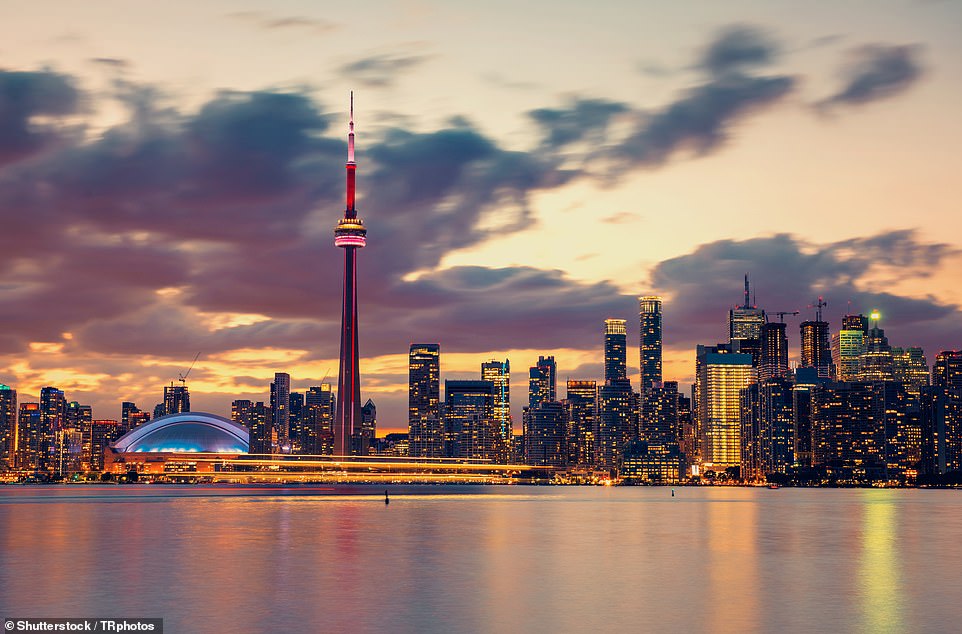 Highlights: Toronto’s skyline featuring the CN Tower, which features a Glass Floor so you can walk or crawl across it while looking down 1,122ft

2. Niagara Falls: The white waters and thick mists of Niagara Falls are Canadian essentials. You’ll have plenty of opportunities to take fun photos – and get wet – on a classic Horatio Hornblower boat tour. 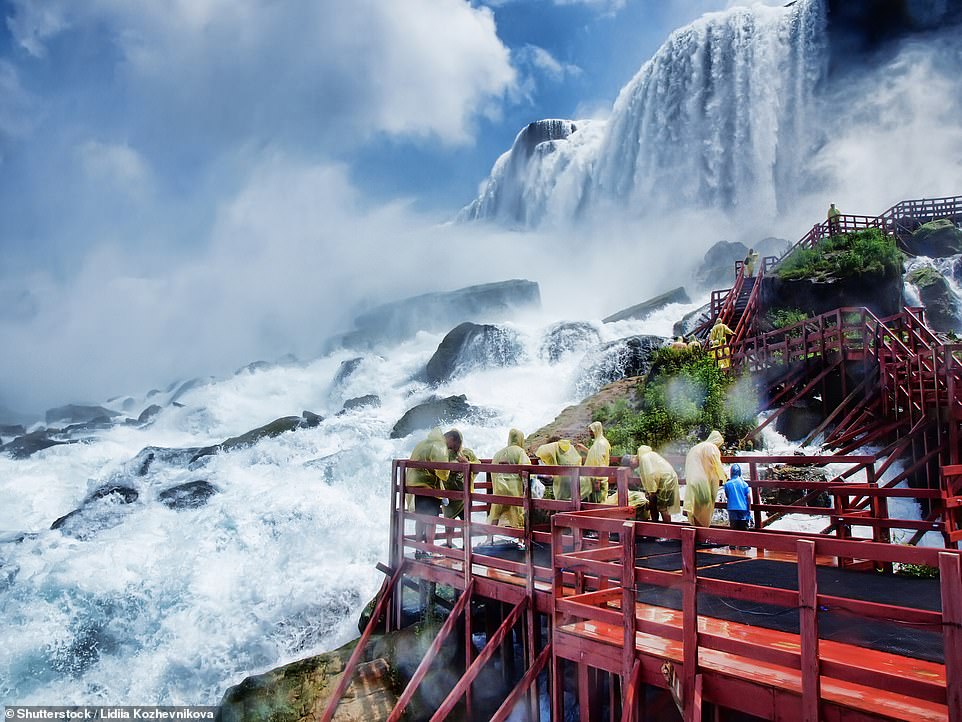 Visitors get drenched at Niagara Falls. If you want to escape the crowds, go on a two-mile walk through Niagara Glen Nature Reserve, or dive into the Falls View Water Park with its 16 water slides, some of which are six storeys high

Alternatively, the Journey Behind The Falls tour takes you down a lift shaft and through a tunnel to a series of observation decks for even more extreme photography.

If you want to escape the crowds, go on a two-mile walk through Niagara Glen Nature Reserve, or dive into the Falls View Water Park with its 16 water slides, some of which are six storeys high.

GET BACK TO NATURE

3. Northern Lights: A great place to see one of nature’s greatest shows is in the frontier town of Whitehorse in the Yukon territory. It’s a sporty paradise you can fly to with Air North, one of the friendliest airlines in the world.

Further south in Saskatchewan, La Ronge has some of the darkest skies on the continent and is also a good base for ice-fishing tours.

4. Vancouver Island: Take a two-hour ferry ride from Vancouver to Vancouver Island, where you’ll find sandy coves and rocky shores. And who knows, you might even catch a glimpse of Harry and Meghan. Looking for a place to stay? The island has everything from campsites to five-star spa hotels.

The island’s cool surf town of Tofino is worth a visit, as is the bigger Nanaimo, where you can try the Nanaimo Bar, a rich, chocolate biscuit. 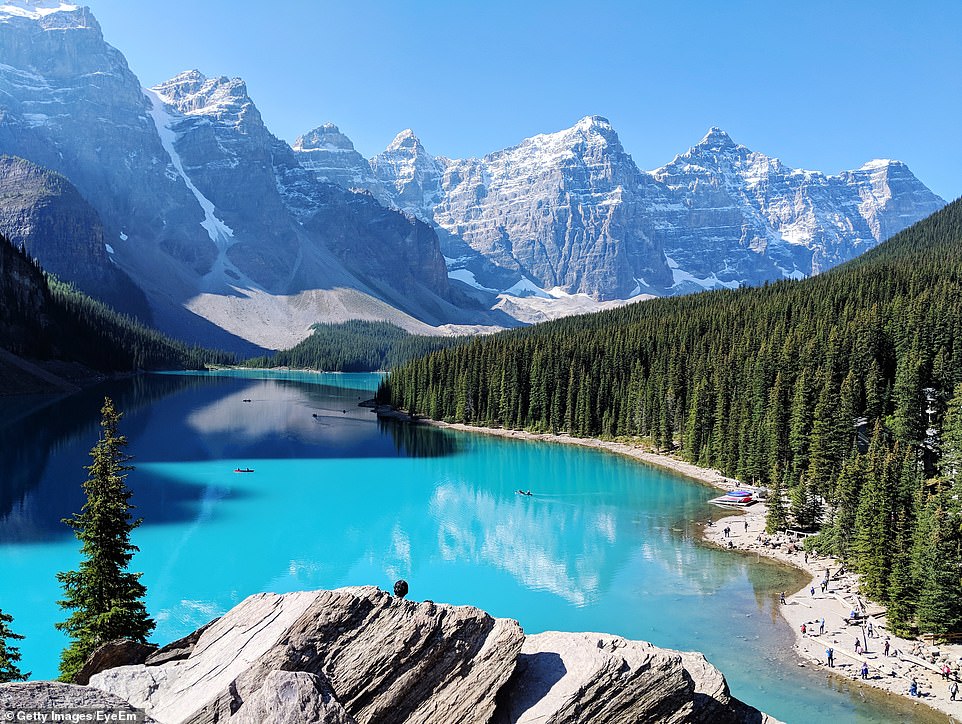 Heart of the Rockies: The stunning Lake Louise (above) is located in Banff National Park. Moraine Lake is quieter and just as beautiful

6. Bay Of Fundy: Stay on the glorious coastline between Nova Scotia and New Brunswick to watch the world’s biggest tidal gap. The difference between high and low tide can be 43ft (the global average is 3ft). The bay is also a great place for hiking and whale-watching.

8. St Laurence Market: In Toronto, head to St Laurence Market, parts of which used to house the local jail. Food fans also flock to stalls in the old Evergreen Brick Works and the streets of the Kensington Market neighbourhood.

9. Granville island Market: In Vancouver, top billing goes to this waterside venue. Almost 200 stall-holders and shop-owners are spread out across formerly derelict buildings – the area also has a thriving brewing and arts scene. Eat under the huge Granville Street Bridge while the city’s water taxis shoot past on the river. There is also a children’s market to explore.

If you fancy a drink, there is a booming wine industry in British Columbia. Most vineyards are located near the town of Kelowna on Okanagan Lake, which is said to contain Ogopogo, Canada’s version of Nessie.

You can stay in style at the Sparkling Hill Resort, owned by the man behind the Swarovski crystal empire (some 3.5 million crystals are embedded in the walls).

10. Canadian Museum For Human Rights: Head to Winnipeg to explore the country’s first new national museum in half a century. The structure is an explosion of glass and stone that stands alongside Bilbao’s Guggenheim for pure drama. Inside, there are sobering exhibits about shocking events from the past, but visitors say they leave uplifted.

11. Vancouver Police Museum: There is a dash of the macabre here – the museum occupies a building that used to be the city morgue. Fans of real-life crime dramas try to solve some of the city’s most notorious cold cases. See confiscated guns and counterfeit currency and take guided Sins Of The City walking tours through nearby Gastown and Chinatown.

12. Biosphere Environment Museum: Step into a scientific world at this museum in Montreal – it’s set inside a giant geodesic dome which fans may remember from TV’s Battlestar Galactica. Exhibits take you 50 years into the future (not pretty, it seems). 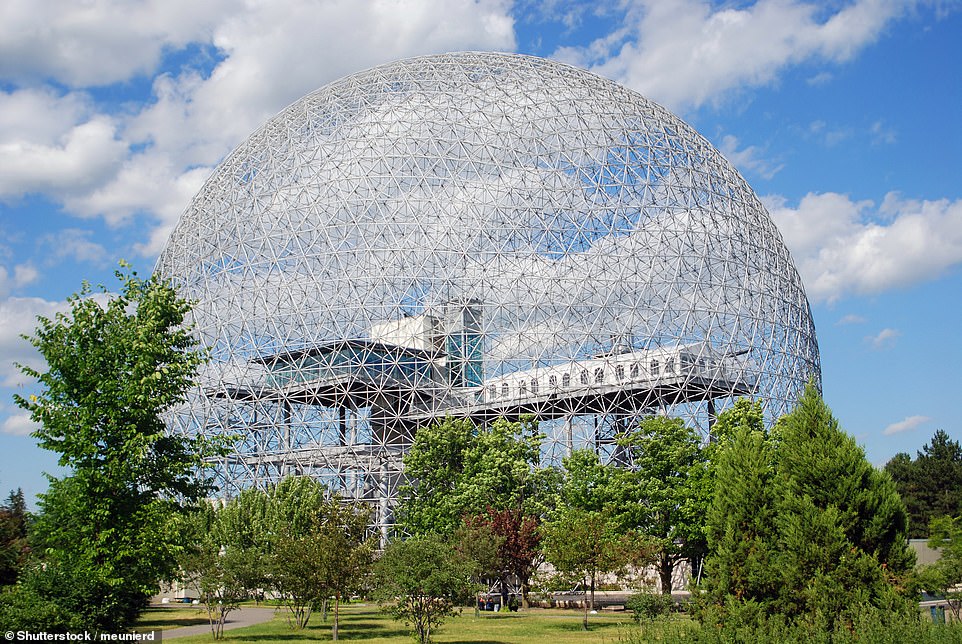 There is also an Ecolab for hands-on experiments, and this year’s big feature is The Killer Net, a representation of how plastic is destroying the oceans.

13. The Canadian: Spend four nights and cover 3,000 miles in the iconic stainless-steel carriages of The Canadian from Vancouver to Toronto (which has a stunning Golden-Age station) via Saskatoon, Jasper and an endless series of forests, lakes and rivers. Eat in a vintage dining car and sit back in a glass-topped observation carriage. You can book an en suite cabin or a more modest ‘corridor berth’, where your bunk is shielded from others by thick curtains.

14. Rocky Mountaineer: Equally famous are the blue, white and gold carriages of The Rocky Mountaineer. The train covers a range of routes from its home station in Vancouver, including First Passage To The West, which passes Kicking Horse River, the mountains of Banff and the short coastal passage between Vancouver and Seattle (you’ll need your passport and an ESTA or visa to enter the United States). Splurge on Gold Leaf class for the best seats and service.

British Airways, Air Canada, Air Transat and WestJet fly to major Canadian cities – BA’s summer return fares to Montreal start at £470. British passport-holders do not normally need a visa but do require an Electronic Travel Authorisation approved in advance. It costs C$7 (about £4) from canada.ca.

16. Folk on the Rocks: Party under the midnight sun as this festival celebrates its 40th anniversary this year in the pioneer city of Yellowknife in the Northwest Territories (another great spot for the Northern Lights). The event, to be held in June, attracts fans from all over the world and acts will perform on six outdoor stages.

17. Just For Laughs: Comedy connoisseurs converge on Montreal in July. Just For Laughs was founded in 1983, and this year some 1,500 performers will appear in theatres, bars and in the street. You can buy a ticket package for access to most shows, or just turn up.

BE A GOOD SPORT

18. Ice Hockey: The sport might be ‘shared’ with the US in a joint National Hockey League but it’s still a classic Canadian experience. Seven Canadian cities have NHL teams – Edmonton in Alberta is one of the most hockey-mad, so watching the Oilers play in front of 18,000 fans at Rogers Place is hard to forget, especially in a local derby with the Calgary Flames.

Top tip? Take a hat to throw on to the ice in case any player scores a hat-trick. The hats are scooped up and donated to charity.

19. Montreal Olympics: The 1976 Games cast a long shadow – organisers went massively over budget and locals call them ‘the Olympics with a capital Owe’. See how the money was spent by taking a two-minute ride up the Montreal Tower, the world’s tallest ‘incline tower’ that leans over the main stadium. Bring your costume and you can swim in the Olympic pool.

Further east, you can see Scotty, the largest tyrannosaurus rex ever found (Scotch was raised to toast its discovery in 1991), at the new T.rex Discovery Centre in Eastend, Saskatchewan.

This beautifully restored former bank dates from 1870 and is ideally situated in the heart of Old Montreal. A deluxe king room costs from £176 a night (hotellestjames.com). 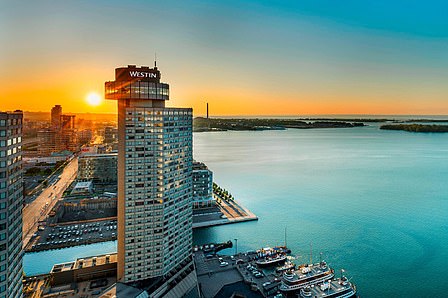 Visitors are lured by the unbeatable waterfront location and fantastic views of Lake Ontario, especially from the terrace. It’s an ideal base from which to explore the city, and the subway is only a short stroll away. A double room costs from £120 a night (marriott.com).

It is so peaceful at this resort in Tofino that you can hear leaves fall. Guests experience the luxe end of adventure when they camp in one of 25 lavish tents flanked by incredible scenery. Hayes & Jarvis (hayesandjarvis.co.uk) offers a seven-night trip to British Columbia – including four nights’ all-inclusive here, three nights in Vancouver and flights – from £7,099 per person.

Possibly the most famous mountain resort in Canada, this beauty continues to attract honeymooners, celebrities and skiers. Rooms start at £257 a night (fairmont.com/lake-louise).

This immaculate Georgian mansion, just 30 minutes from Niagara Falls, is set in 17 acres of manicured gardens and vineyards. Rooms cost from £107 a night (riverbendinn.ca).