Jose Mourinho was hired at great expense to win trophies, to end the long wait for Tottenham and convince players they might be able to fulfil their ambitions without moving on.

Spurs were already out of the Carabao Cup and far adrift in the Premier League. They progressed in the Champions League but there was no question which was as the most achievable target.

Mourinho fixed his sights on the FA Cup as the most achievable target and his team are another step closer, with Norwich next, at home in the fifth round. 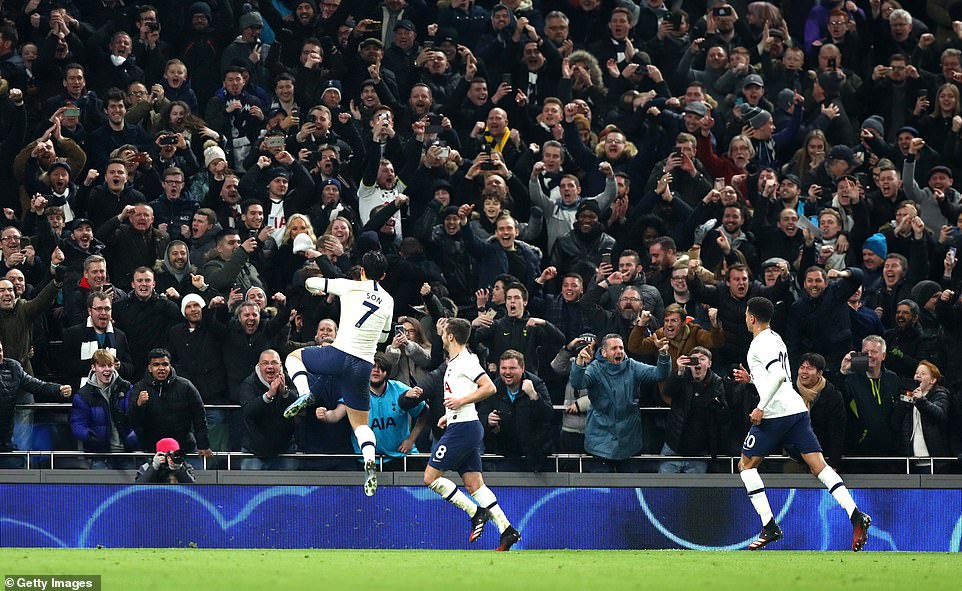 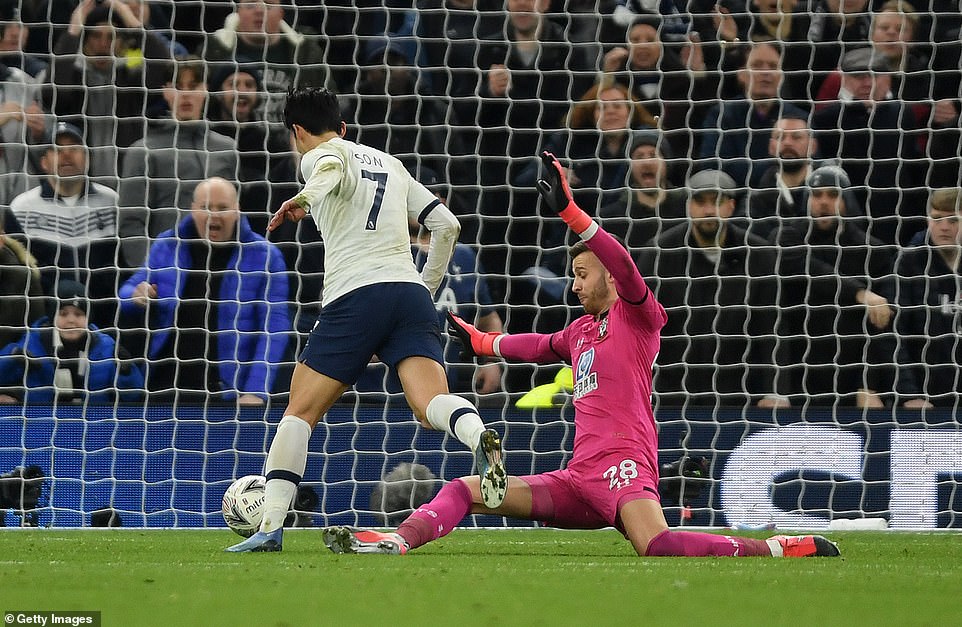 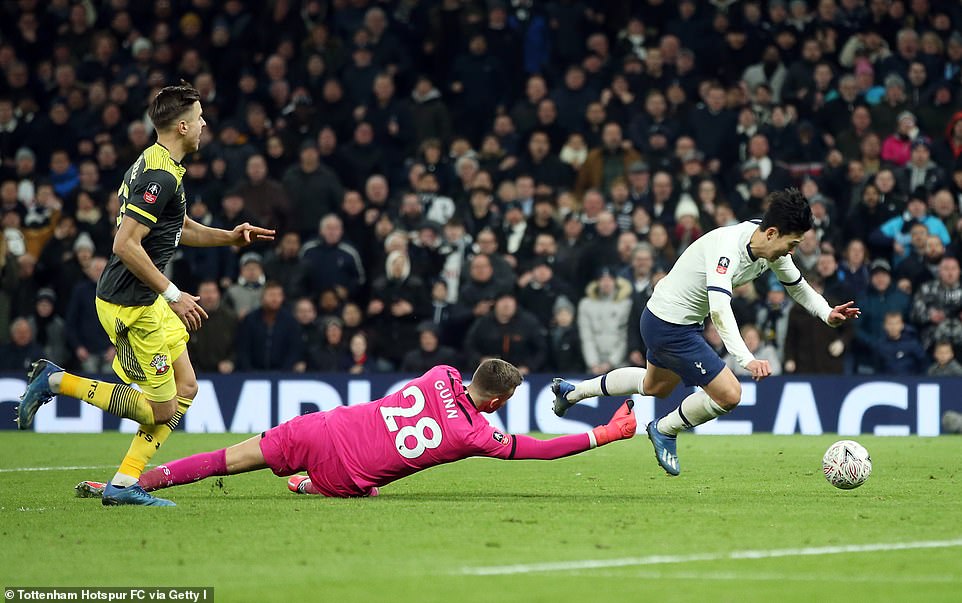 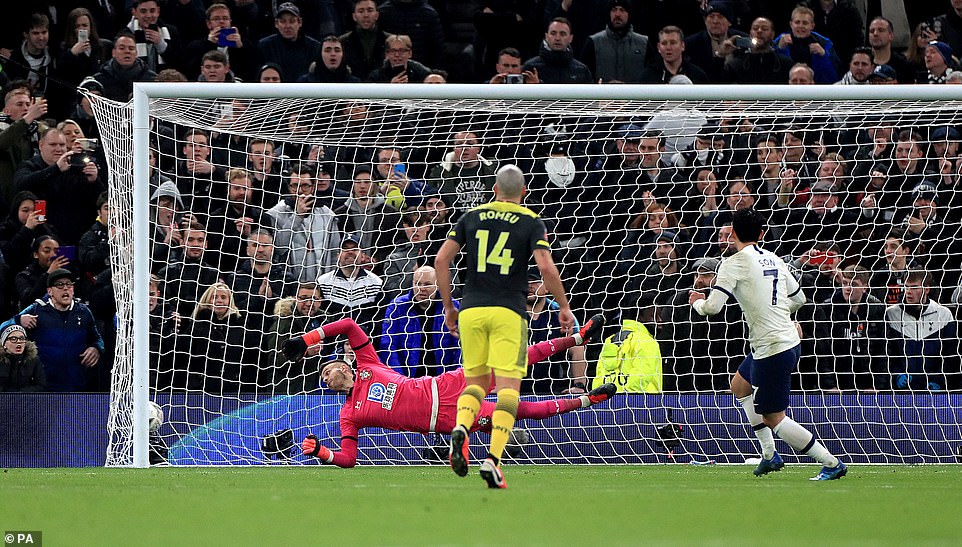 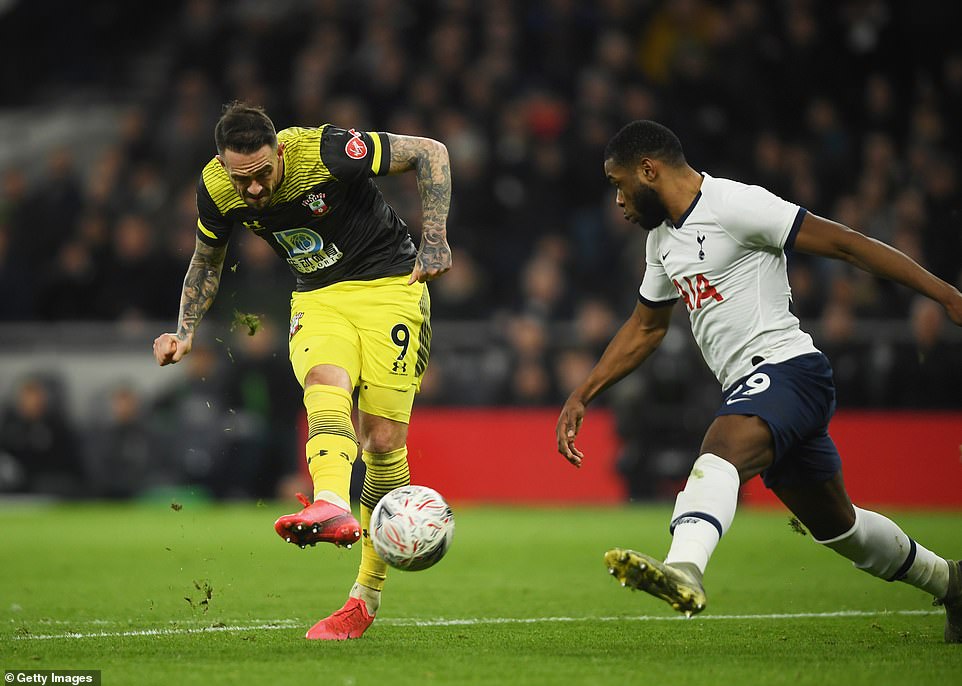 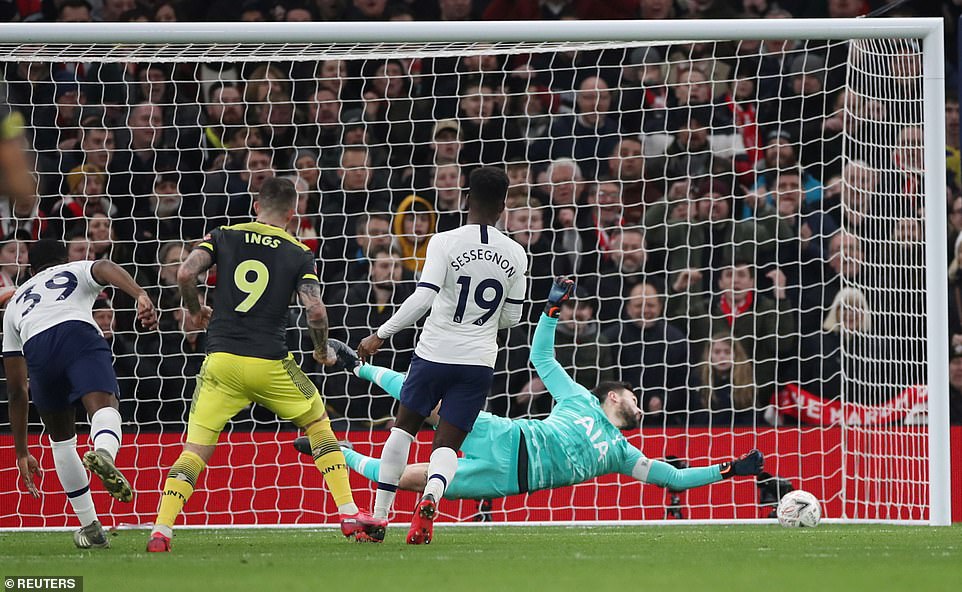 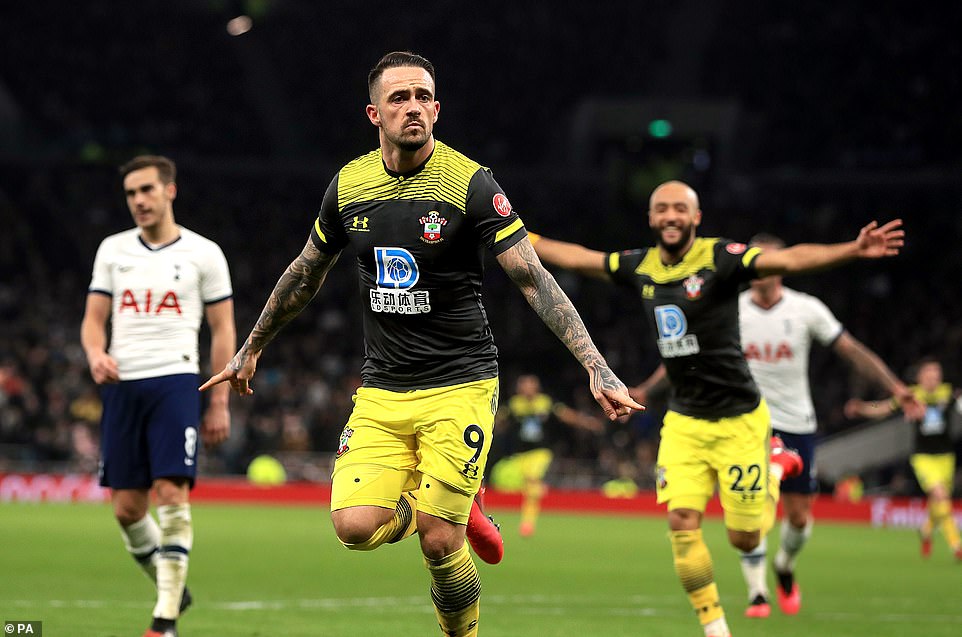 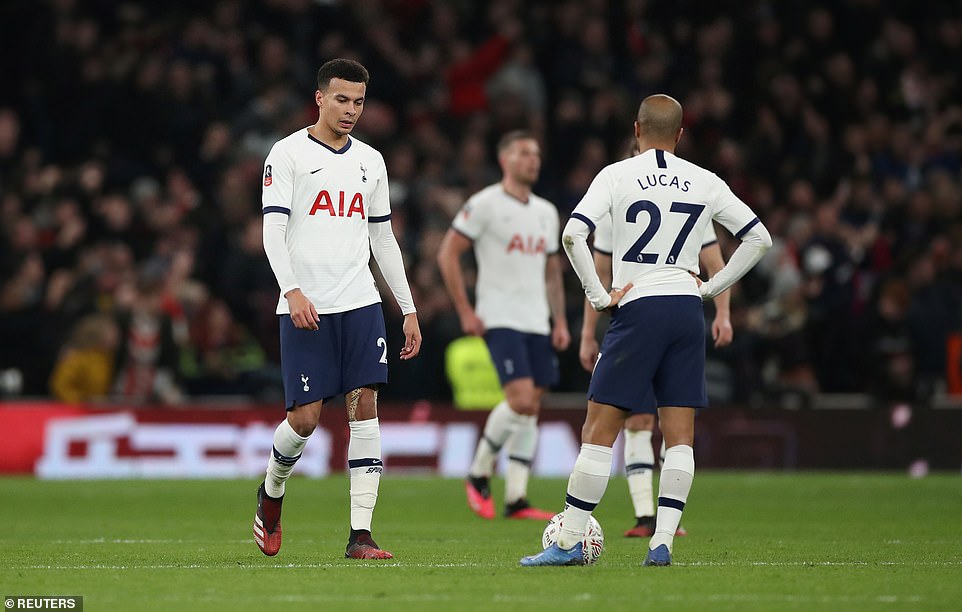 But, this was far from straightforward against a spirited Southampton who refused for so long to accept the script.

Having fought back to draw in the final minutes of the original tie at St Mary’s they were by far the better team in this replay at White Hart Lane.

The Saints were unfortunate to trail in the first half to an own goal by Jack Stephens and worthy of the equaliser scored by Shane Long.

They lost James Ward-Prowse in the first to what on first impressions was a nasty injury.

And still they found a drove forward until with only 18 minutes remaining they went ahead for the first time in the tie.

The goal was created by the outstanding Nathan Redmond and converted by Danny Ings.

Redmond carried the ball forward on a diagonal run, pulling Spurs out of position as he had done all night and found Ings who curled a precision finish inside the post.

When it hit the net it felt as if it might be the winner but it served to finally shake the home team from their slumber.

Lucas Moura fired Tottenham level within six minutes, with a crips drive from the edge of the penalty area.

And as the tie seemed destined for extra time, referee David Coote awarded a penalty to Tottenham for a foul by goalkeeper Angus Gunn on Heung-min Son who climbed to his feet to score from the spot.

Only three minutes remained and Mourinho’s team protected their lead.

They will face Norwich at home in the fifth round; they can glimpse Wembley in the semi-final and Mourinho is still on course for silverware but this FA Cup run is proving to be anything but straightforward.

Tottenham needed a replay to squeeze past Middlesbrough in the previous round when Argentinian duo Giovani Lo Celso and Erik Lamela scored the goals to win the tie and evoke memories of Ossie Ardiles and Ricky Villa.

Both Lo Celso and Lamela were forced out by injuries last night, however, and Dele Alli started on the bench after a knock on his ankle in Sunday’s win against Manchester City.

Steven Bergwijn, who scored on his debut against City, was ineligible because he has been signed since the original tie at Southampton.

All of which left Mourinho short on attacking options as he sought to capitalise on the momentum of beating City before an 11-day break. 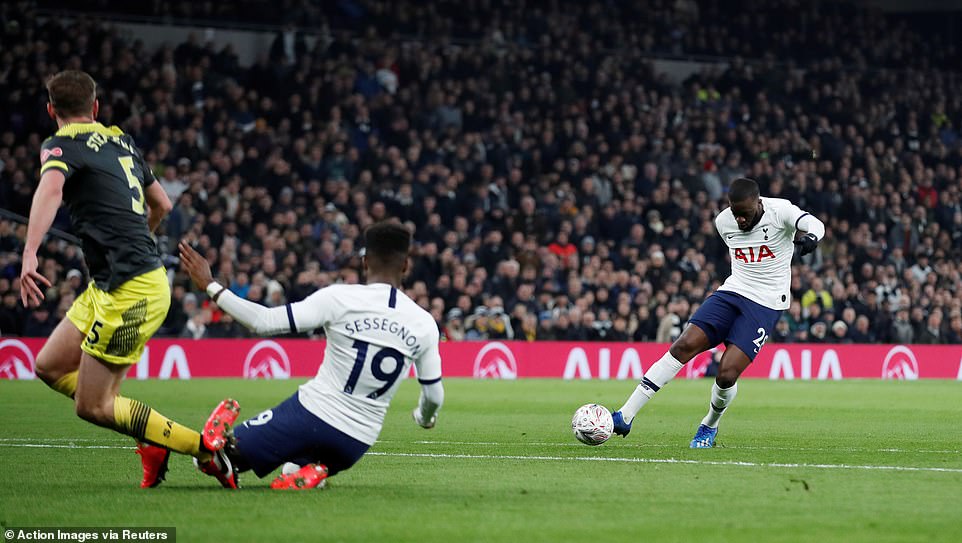 Tanuy Ndombele’s effort after 12 minutes deflected off Jack Stephens, who went to ground, and past Angus Gunn 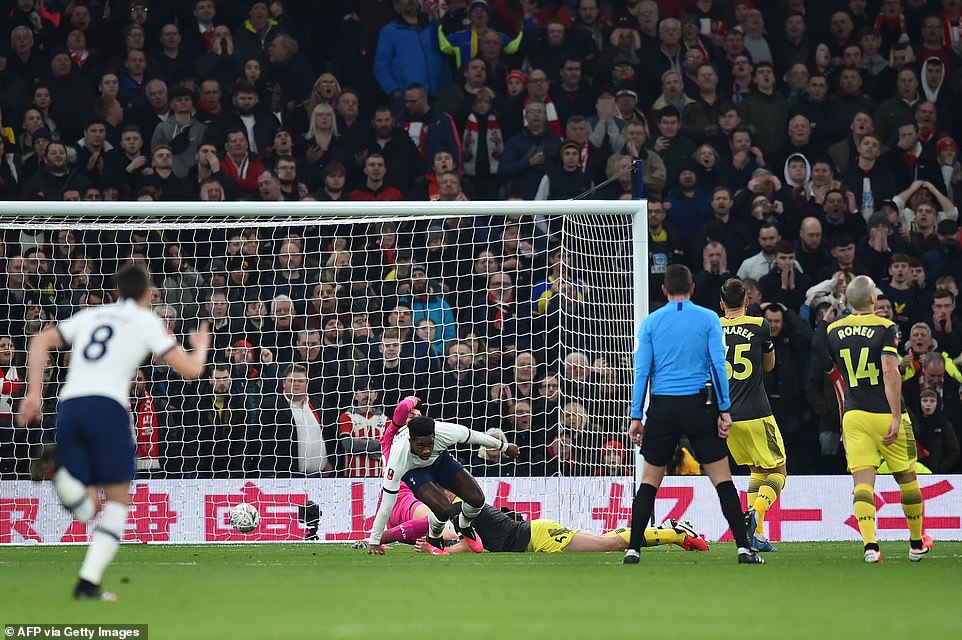 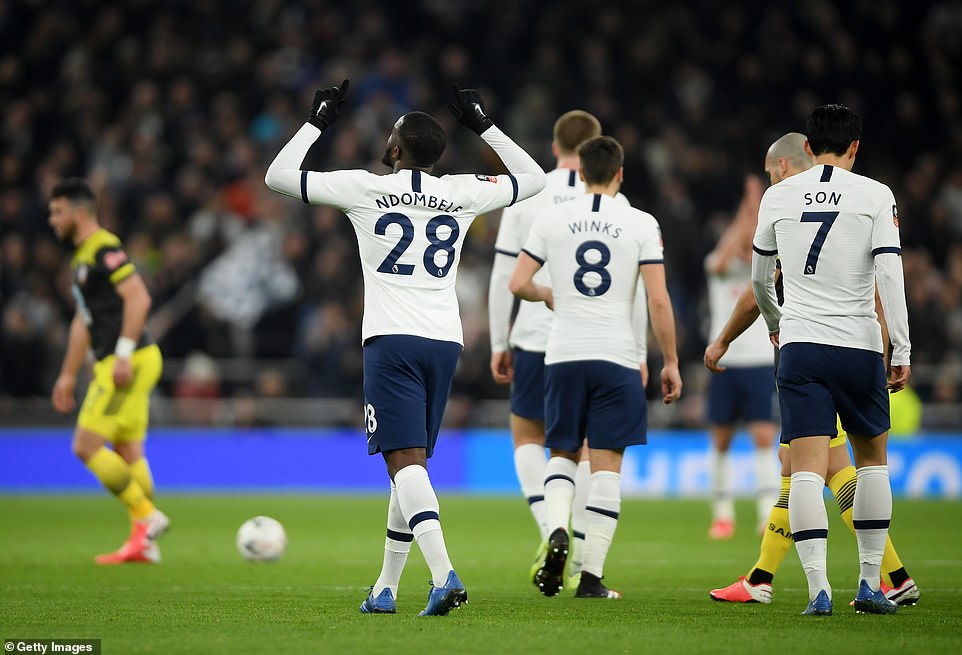 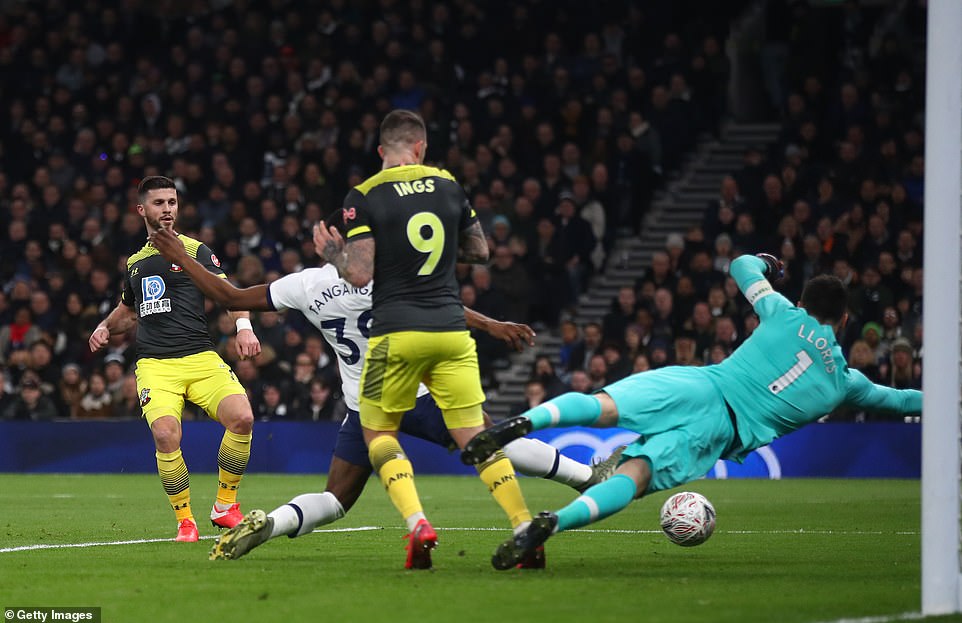 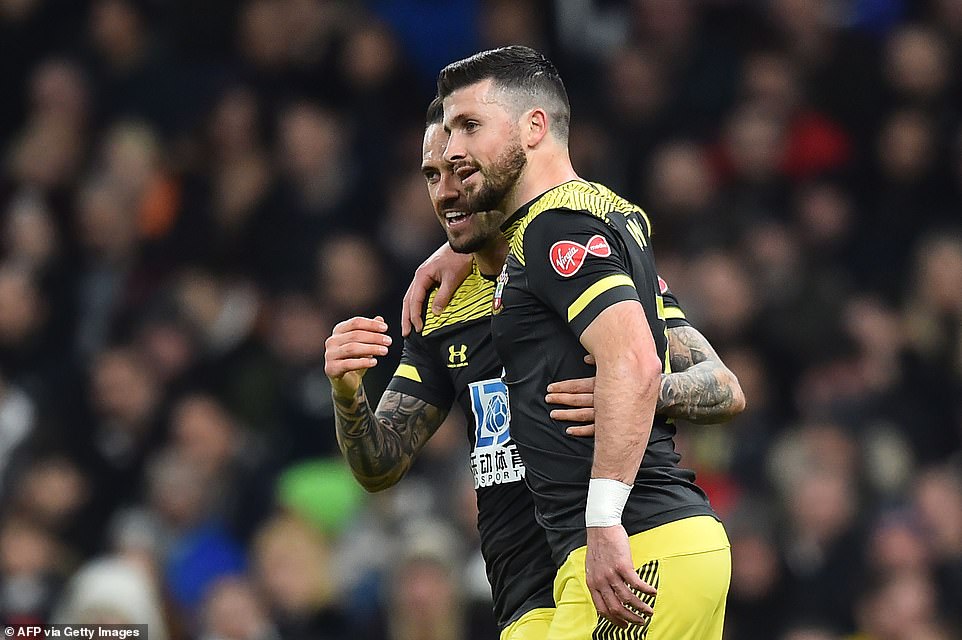 Ryan Sessegnon, recalled at left wing-back, forced an early save from Gunn although it was the visitors who made the better start.

Hugo Lloris made early saves to deny Ings and Nathan Redmond as the Saints bubbled with energy before they were rocked by Tanguy Ndombele’s deflected strike.

Sessegnon dribbled into the penalty area from the left flank and was halted by a sliding tackle by centre-half Stephens.

The ball rolled kindly for Ndombele who snatched at the chance and it seemed to be flying wide until it clipped Stephens, lunging across to make another block.

Gunn was unable to react as the ball changed direction and flashed into the net.

Ndombele has not scored since his goal against Southampton in September but this was attributed to Stephens.

Undeterred, Hasenhuttl’s side continued to press forward, moving the ball fluently with purpose and terrific pace. 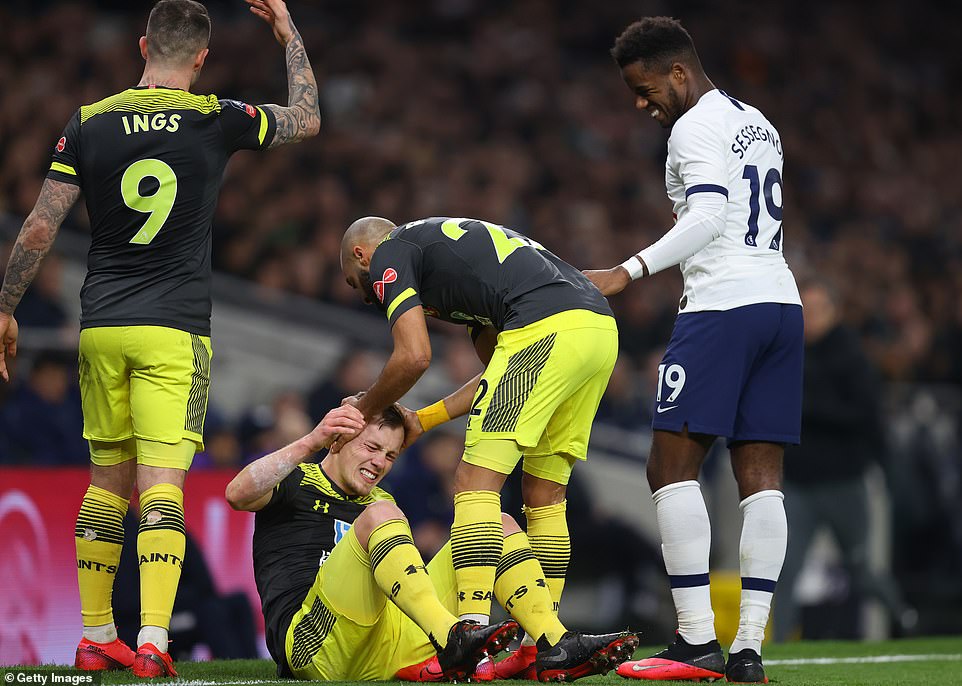 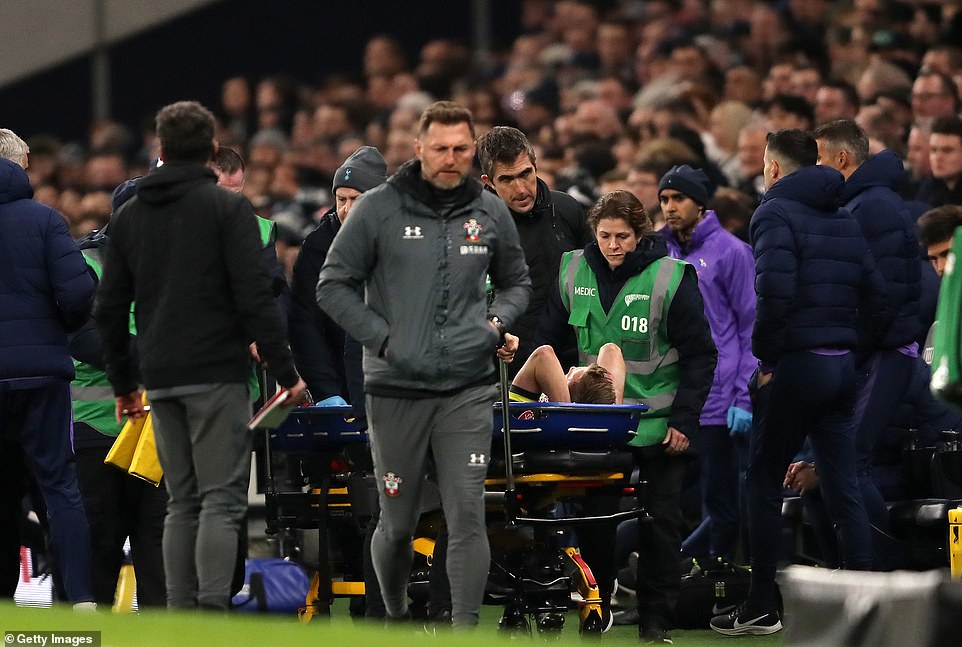 Tottenham were dominated in midfield and vulnerable at the back, unable to contain them.

Ward-Prowse, deputising as a right-back, produced a stylish pass to release Ings who beat Lloris with a crashing drive which struck the bar.

Redmond tested the Spurs ‘keeper again from distance before forcing the equaliser with another low shot on the turn which Lloris could only parry.

Long swept onto the rebound and tucked it away.

Southampton deserved to be level at the very least but suffered another set-back almost immediately when Ward-Prowse was injured.

He sprinted to close down Sessegnon who clipped a pass forward and caught the Saints player just below a knee with his follow through.

There was no intent but Ward-Prowse was clearly in agony and teammates were concerned as he was treated and carried from the pitch.

Hasenhuttl reshuffled with Jannik Vestergaard on and Stephens moving to right-back.

Spurs flickered before the half-time interval and squandered good situations on the break.

Son Heung-min hesitated until it was too late to find Serge Aurier with a pass. Son, enjoying more freedom after Southampton’s enforced change, was foiled by a tackle by Jan Bednarek.

Lucas Moura headed wide from a Son cross early in the second half but Saints were still on top and Tottenham were struggling for control.

Mourinho made changes and switched to a back-four in an attempt to shake some life into his team.

Jan Vertonghen appeared stunned to be hauled off and trudged slowly back to the bench where he did not welcome a consolatory pat on the shoulder from his boss.

Lloris produced a reflex save to push a header by Vestergaard over.

Ings was next to strike before finally Tottenham stirred first with Moura and then with Son and they move on.