The hard-working Victorians who first built the reservoirs, pipes and sewers that have kept the rapidly-growing population of London watered and clean ever since the end of the 19th century are revealed in a collection of newly-restored photographs.

Impeccably-dressed men are seen wearing full suits as they stand on muddy construction sites and oversee building work to complete water wheels and Fortis Green reservoir in Haringey, north London, in the type of major infrastructure project that British titans of industry and their employees excelled in.

Also in the newly released historic pictures from the 1800s and 1900s are images of the sewer network with engineers called ‘flushers’ descending into drains and others in bowler hats inspecting the sites.

The pumping mains outside the engine house of Staines reservoir in Surrey are also seen in one black and white snap, with the infrastructure and red brick building still standing today.

A five-year project, carried out in partnership with the City of London Corporation, has seen 19,579 glass slides and transparencies catalogued in acid-free photon envelopes and boxes with many now shared online.

The stunning images are now stored at London Metropolitan Archives in Farringdon, alongside Thames Water’s extensive collections from London’s former water companies, which date back to 17th century.

The five-year project, carried out in partnership with the City of London Corporation, has seen 19,579 glass slides and transparencies catalogued in acid-free photon envelopes and boxes. The repackaging of the images, to professional archival standards, will help to preserve them for generations to come.

They are now stored at London Metropolitan Archives in Farringdon, alongside Thames Water’s extensive collections from London’s former water companies, which date back to 17th century. Many of the images were also digitised by an external contractor and displayed online to be viewed by the public. 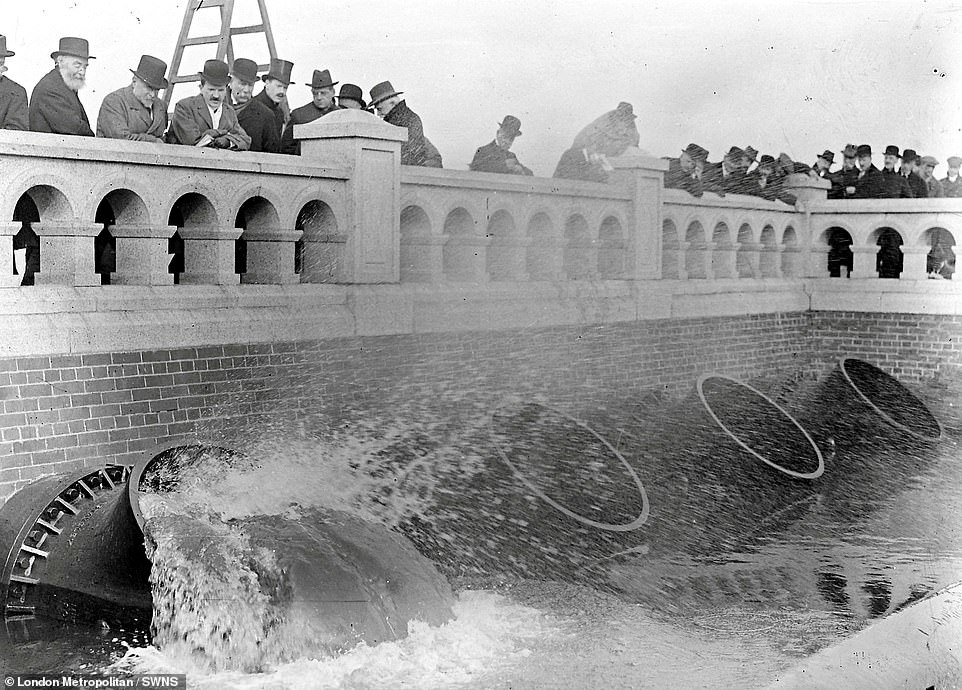 Newly released historical pictures have shown London’s impressive water and sewage network being built by well-dressed Victorians. Pictured is a stylish crowd of men in bowler and top hats gathering along a bridge to watch water spraying out from underneath them during the opening of Chingford Reservoir in 1912 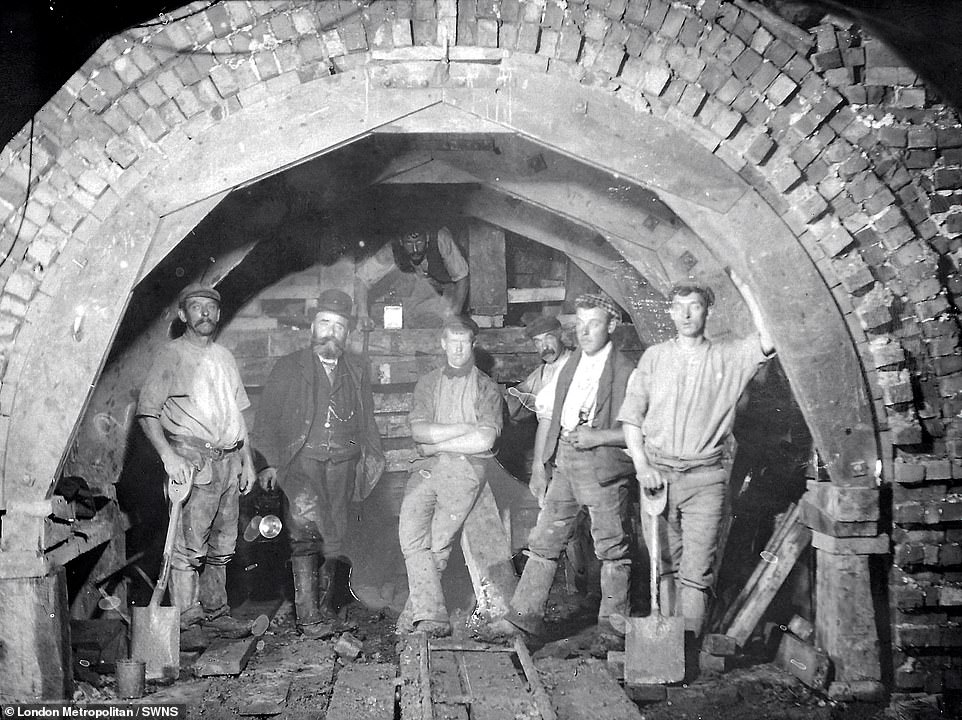 Other black and white snaps from the collection include this image of seven men, including one sporting a pocket watch and bowler hat, taking a break from their work in 1894. The pictures are stored at London Metropolitan Archives in Farringdon 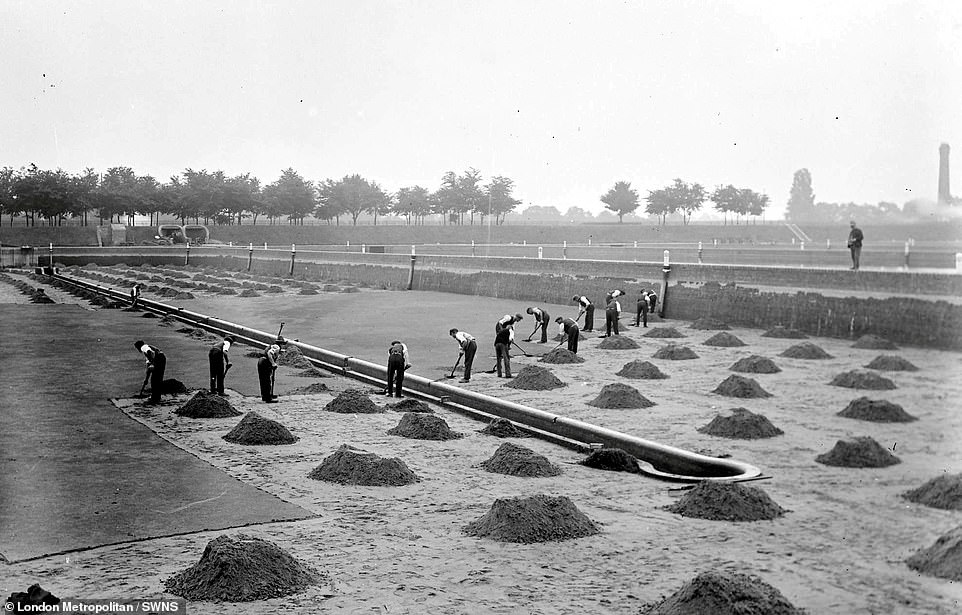 The Metropolitan Water Board was founded in 1903 to bring the nine private water companies which were supplying water to London under a single public body. Pictured are men digging holes at the Walton-on-Thames Water Treatment Works in 1909 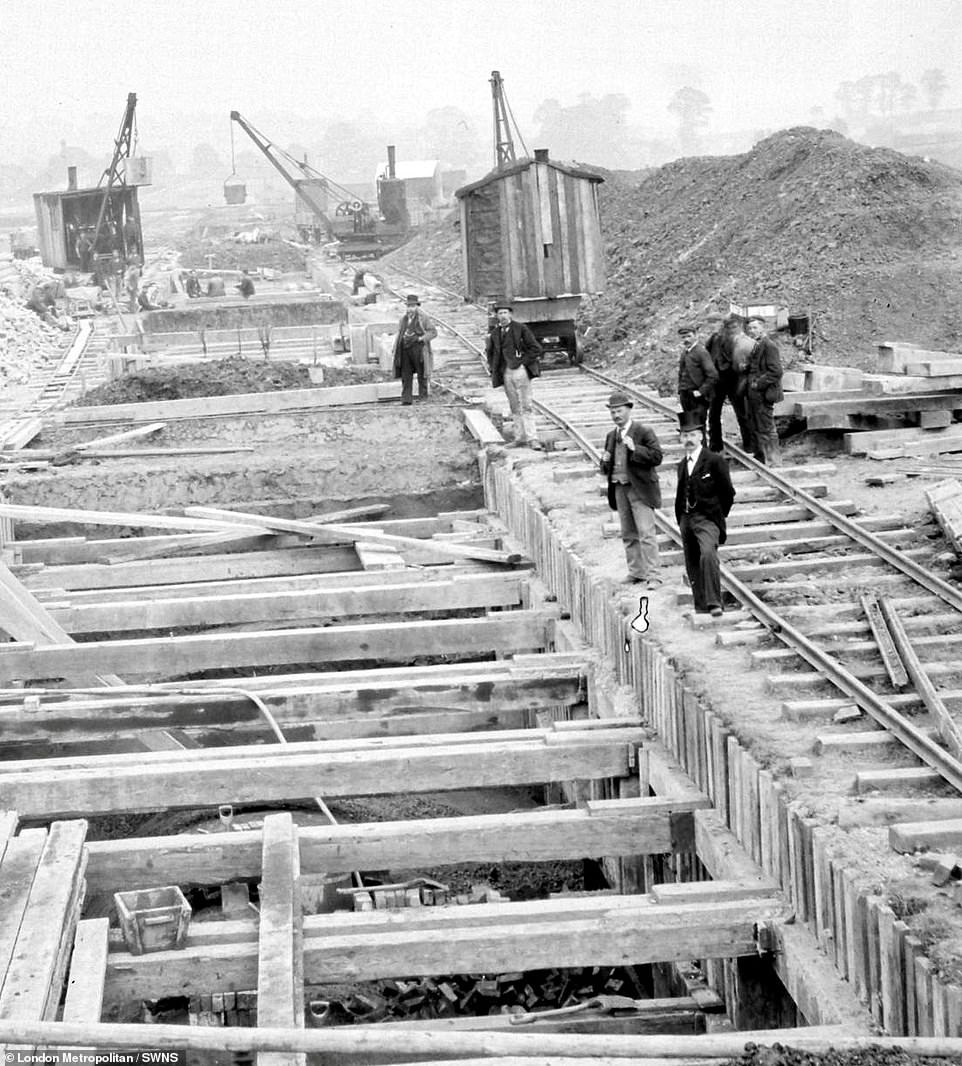 By the late eighteenth century, more than 80 percent of London’s houses had piped water, making it a model for other cities around the world, reports the City of London. Although embarking on large building projects the Victorian men (pictured at an unknown location in 1894) who were tasked with improving the network still ensured they looked their best in full suits

The Staines Reservoirs lies to the east of the King George Reservoir near Heathrow airport in Surrey. The pumping house (left now and in a black and white picture, right, with pipes yet to be connected and laid for the network) is pictured during construction in 1909 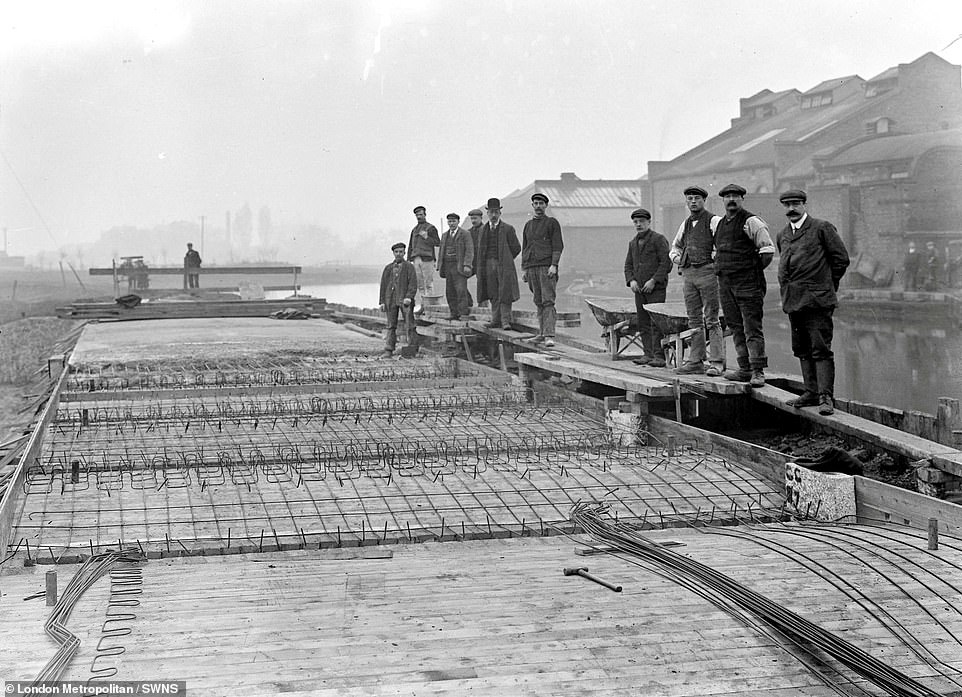 The King George V Reservoir, in Enfield, is part of the Lee Valley Reservoir Chain that supplies London with drinking water. It is a storage reservoir and covers 420 acres, making it the largest in London. Workmen build the King George’s reservoir in London in 1909 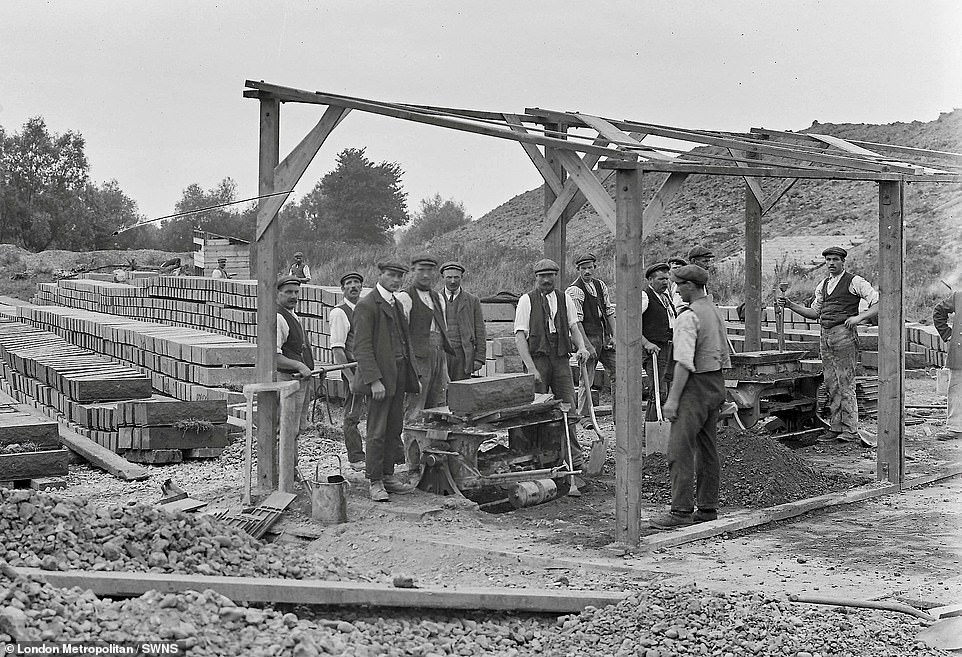 The Island Barn Reservoir was authorized by the Lambeth Water Act of 1900 and was built by Sir Robert McAlpine. The project was completed and opened in 1911 (workers are pictured with lots of blocks during the building process) 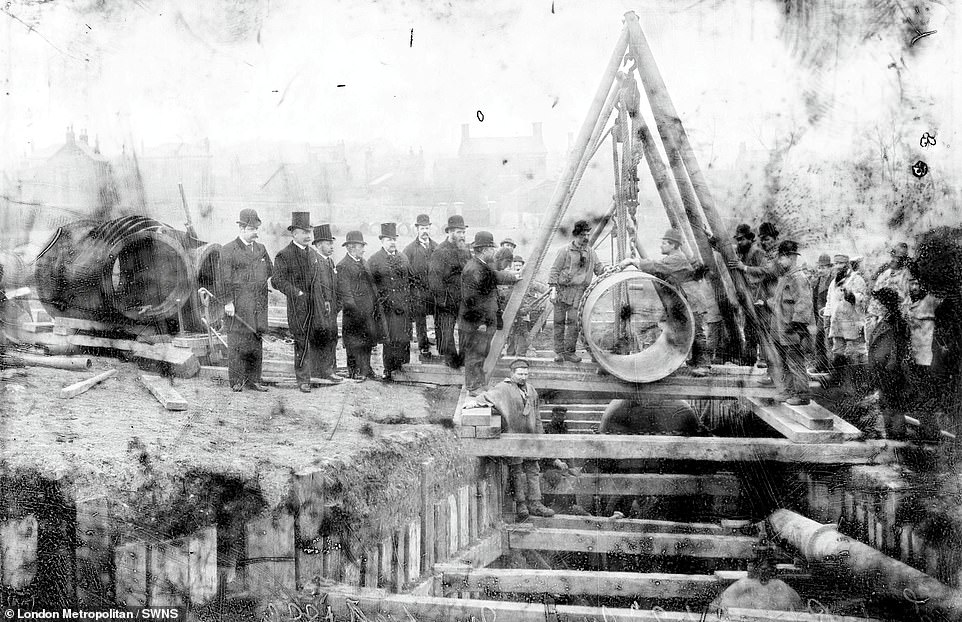 A large crowd of men in a variety of outfits gather on both sides of a dug out walkway to watch a smaller section of pipe being installed at Nunhead in 1889. This reservoir is now a covered hill-top one with views of south London, which is next to a cemetery and boasts 15 acres of wide-open green space

Construction was started on Enfield’s King George reservoir in 1908 and completed in 1912. It was opened by King George V in 1913 and named in his honour. A well-dressed young man is seen inspecting the building site during construction in 1909. Pictured left is the reservoir, which is part of the Lee Valley Reservoir Chain, now 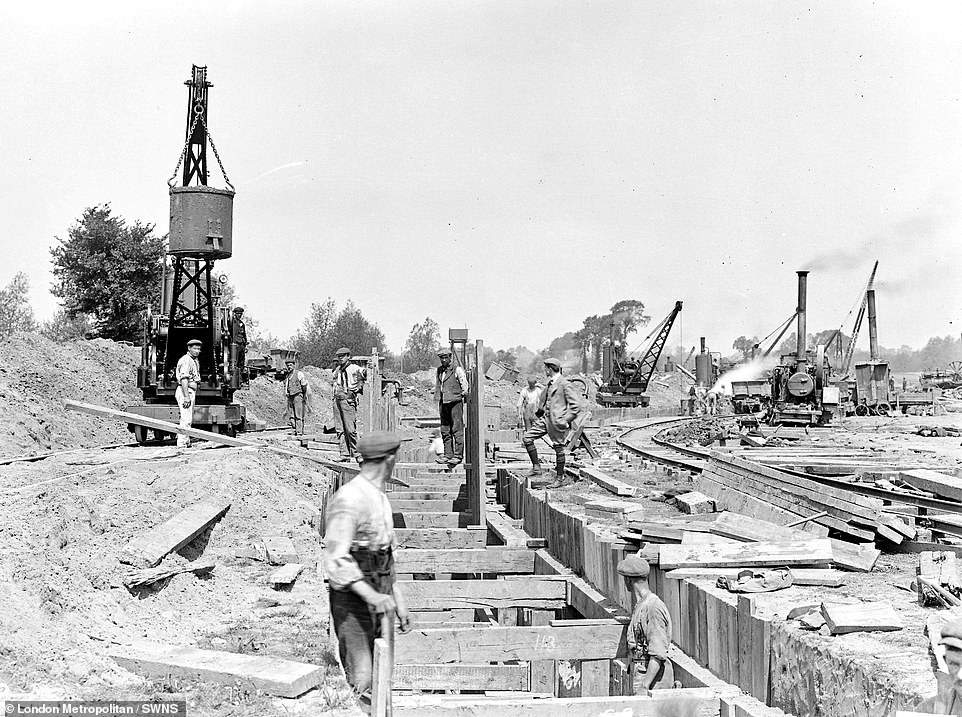 This fascinating snap shows several workmen building Island Barn reservoir in 1909. Some of the men are seen operating heavy machinery while others lay wooded planks and help guide the others laying pipes. The reservoir is now covered over with grass 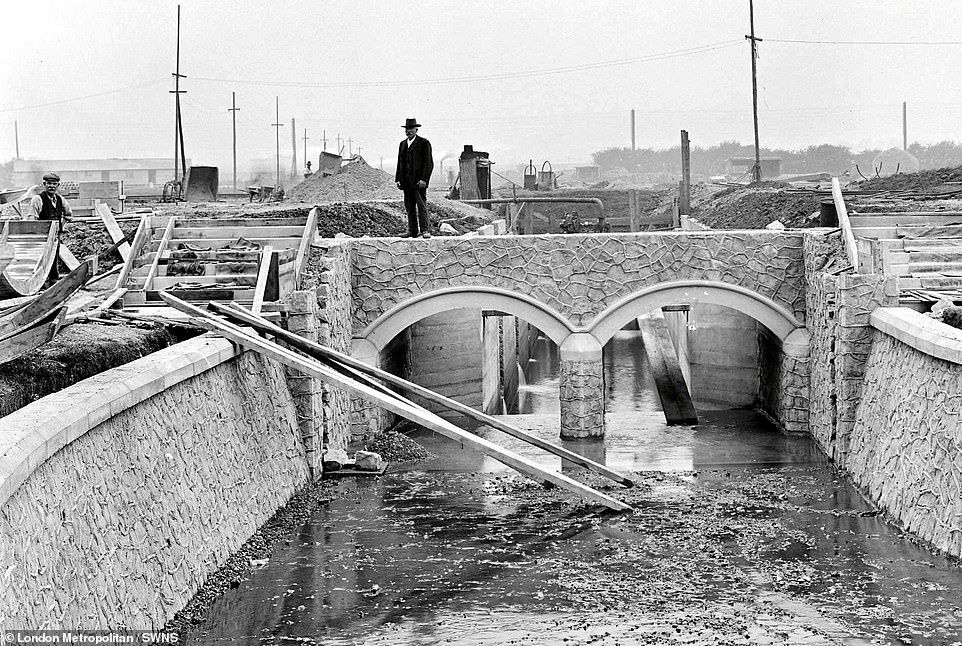 The building work for a bridge and chanel for part of London’s waterworks in seen under construction in 1910 with a man in a black suit is seen observing others working to the side of the bridge. Although water standards improved throughout the 1800s the city still had to deal with cholera and the Great Stink of 1858 when the River Thames had become an open sewer 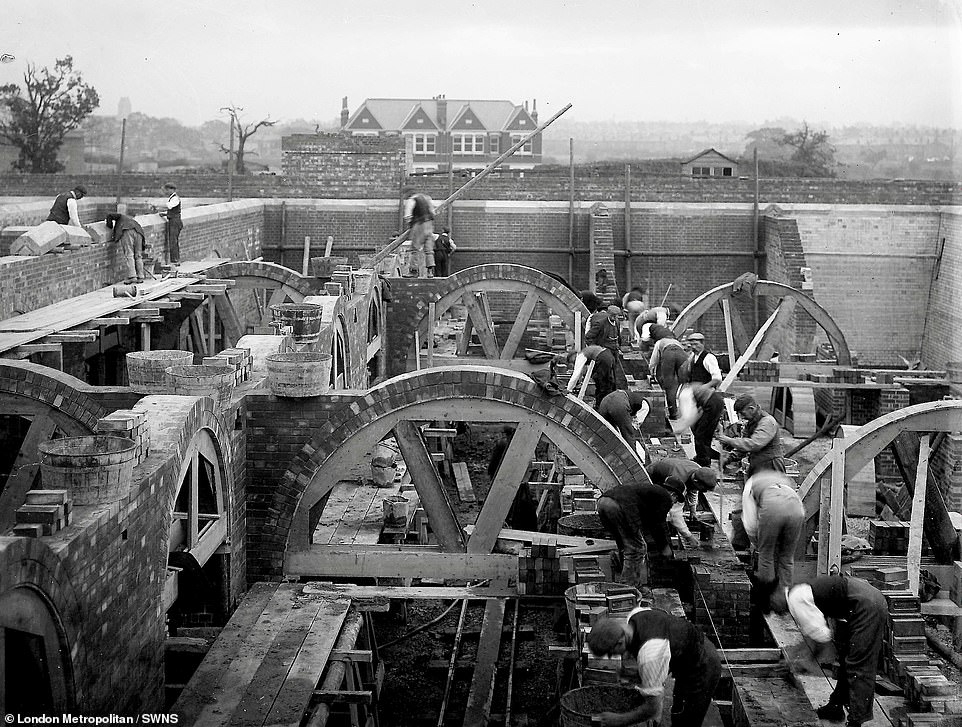 Lots of men are seen working on the Fortis Green reservoir in London in 1907, with one carefully balancing a long wooden pole. By the early 1900s many privately owned water companies were brought into public ownership and so were able to access public money needed to fund improvements such as new steel water mains, major reservoirs and double filtration 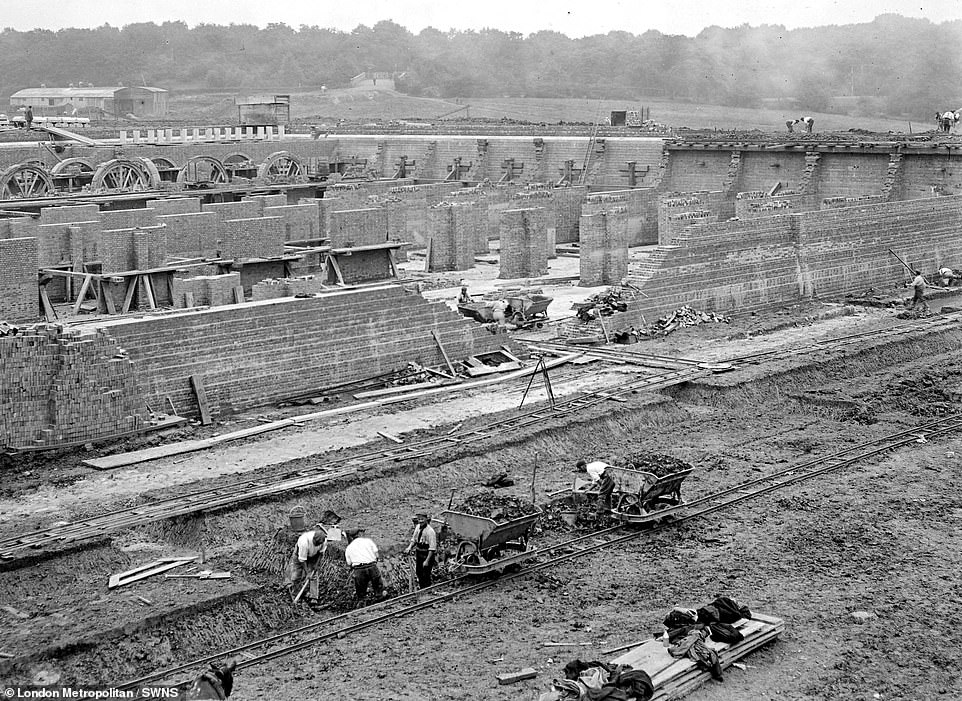 The scale of the Fortis Green reservoir can be seen in this snap taken during construction in 1907. A five-year project has seen 19,579 glass slides and transparencies catalogued in acid-free photon envelopes and boxes with many now shared online 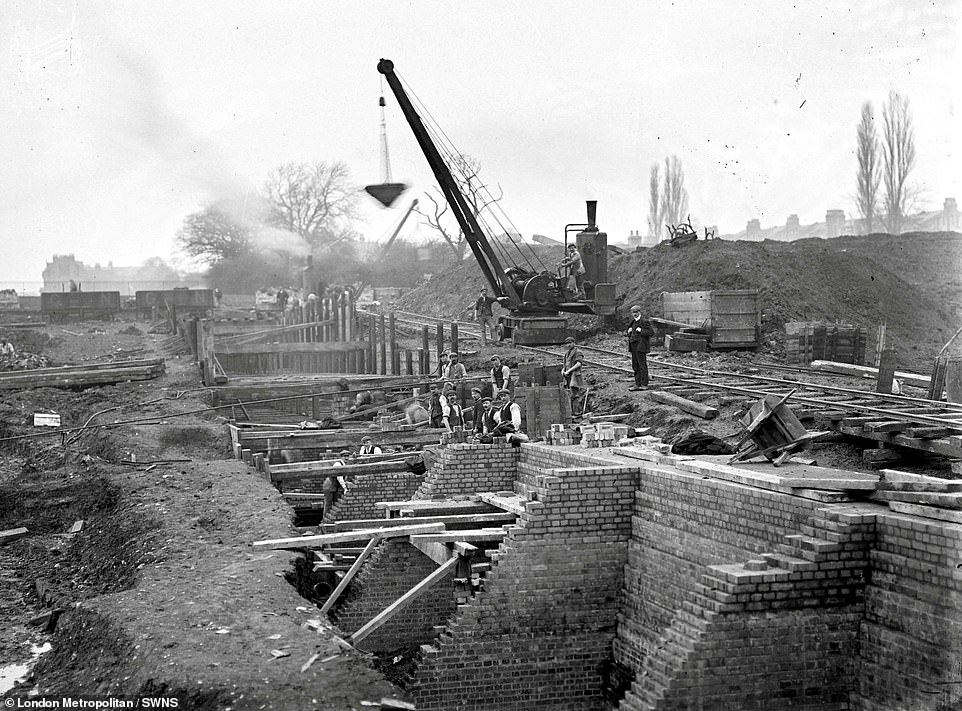 The men working at the Fortis Green reservoir had to lay pipes, build structural walls and operate machinery for the works to be completed (pictured are workers in 1907). The standard of drinking water improved greatly between 1910 and 1916 after the introduction of water chlorination and further advances in the treatment and supply of water 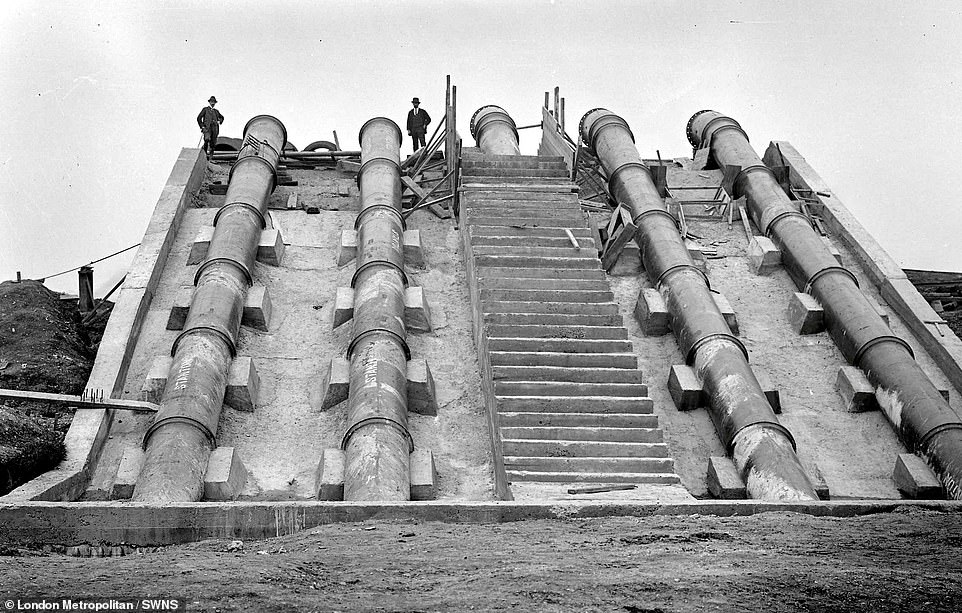 Another image shared online and at the archives shows huge pipes running up a large structure at an unknown location with two men inspecting it. The photo collection shows the type of major infrastructure projects that British titans of industry and their employees excelled in during the 19th century 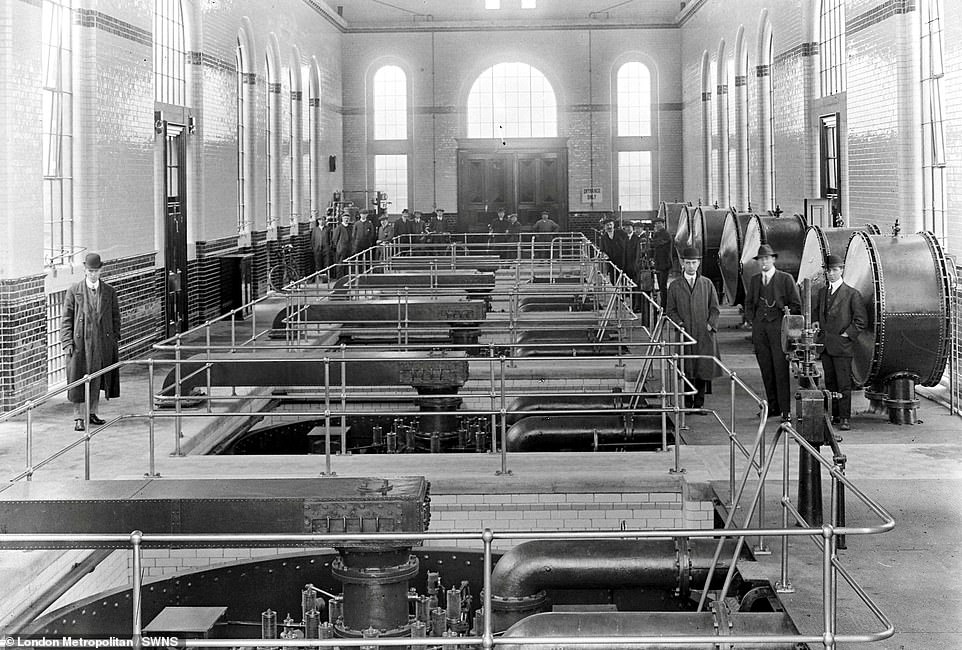 The inside of a tiled pumping station looks immaculate in another picture now available from the archives. By 1805 London’s population stood at one million. This increased the pressure on existing water supplies, but key innovations such as cast iron piping eventually helped improve the situation and laid the groundwork for big changes in the 1900s 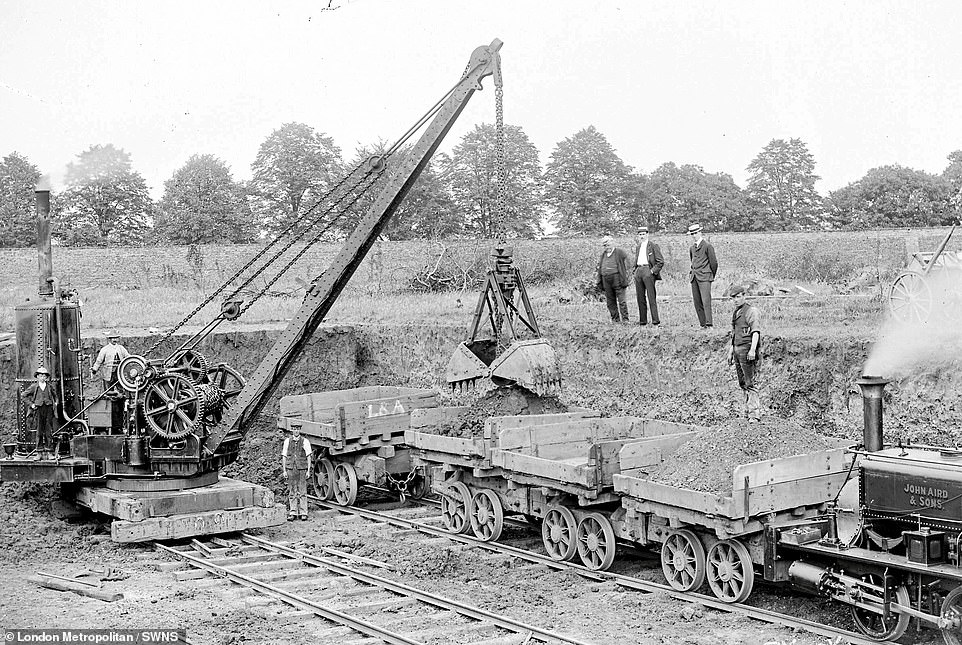 Small railways were laid to help move the machinery (pictured at an unknown location) during construction and development of London’s water network. The ownership of water and wastewater systems in the 1900s was divided between 180 bodies making co-ordination increasingly difficult. It wasn’t until the 1973 Water Act that things were simplified 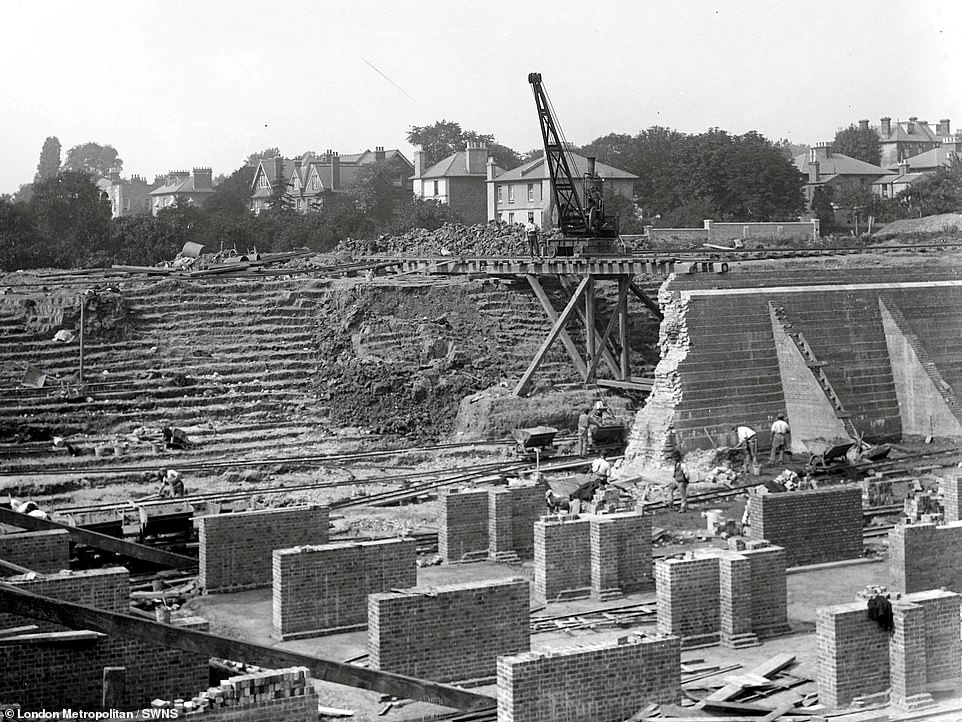 Victorian houses can be seen over looking the construction site of the Fortis Green reservoir in London in 1907. Up until 1800 the River Thames had been relatively clean, supporting a large fishing industry, but as the population of the city grew sewage leaked its way into the water supply, meaning it was not fit to be drank and more infrastructure was necessary 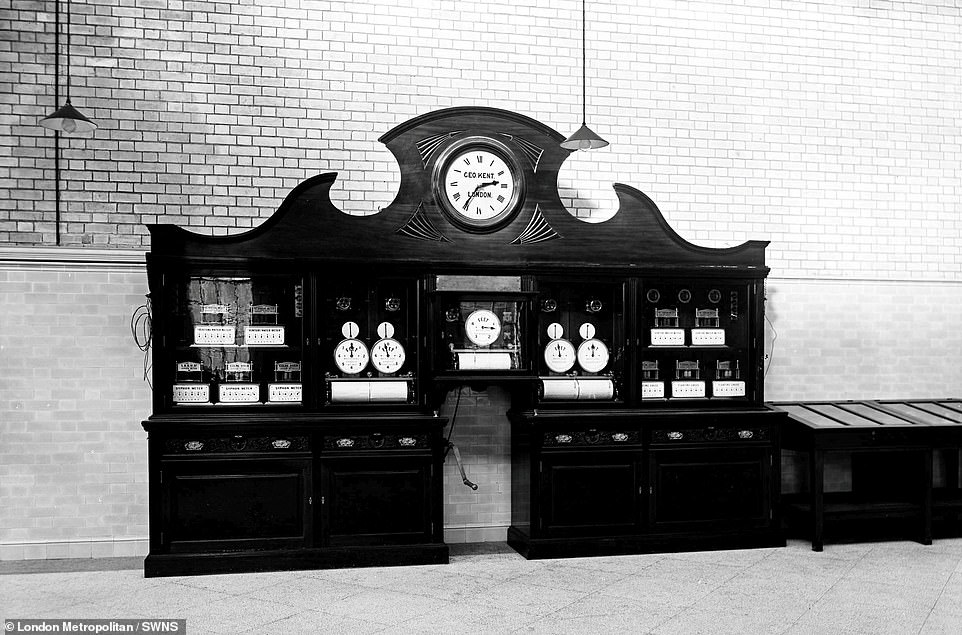 The machinery at Staines Reservoir is pictured when it was newly commissioned in 1910. The history of Thames Water can be traced by to the early 1600s when the New River was created to meet rising demand for water in London. This was a 40-mile channel which carried water from springs in Hertfordshire to Islington in North London and became operational in 1613 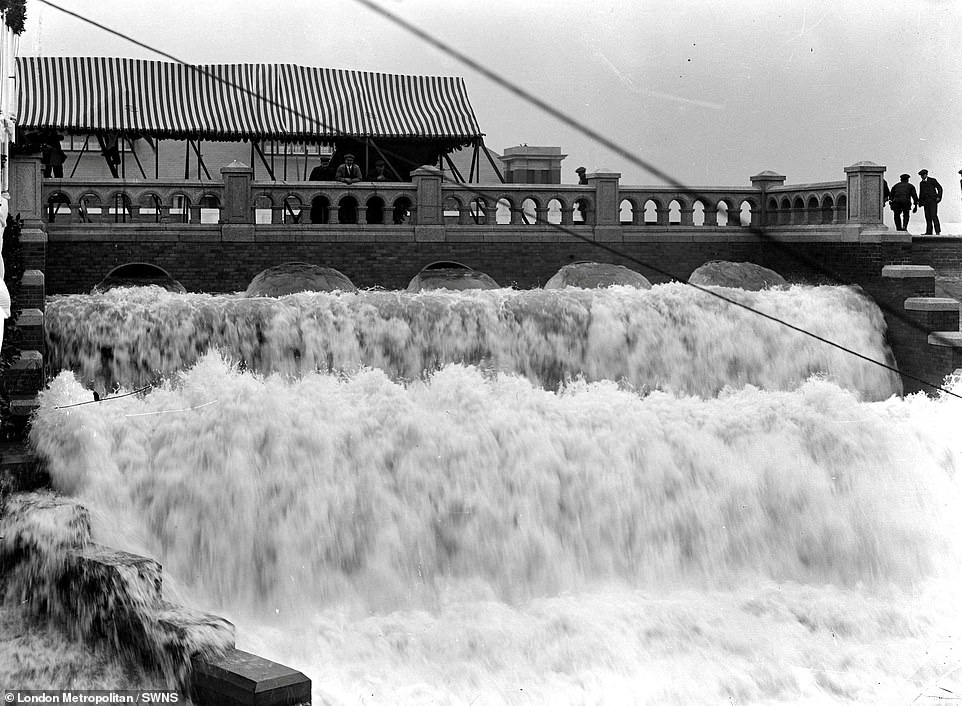 Water is seen gushing through Enfield’s King George’s Reservoir during its inauguration ceremony with five pumps working in 1913. An idea for the reservoir was conceived as part of an overall plan for the Lea Valley in 1893. At this time the responsible authority was the East London Waterworks Company however the Metropolitan Water Board later took charge of the project 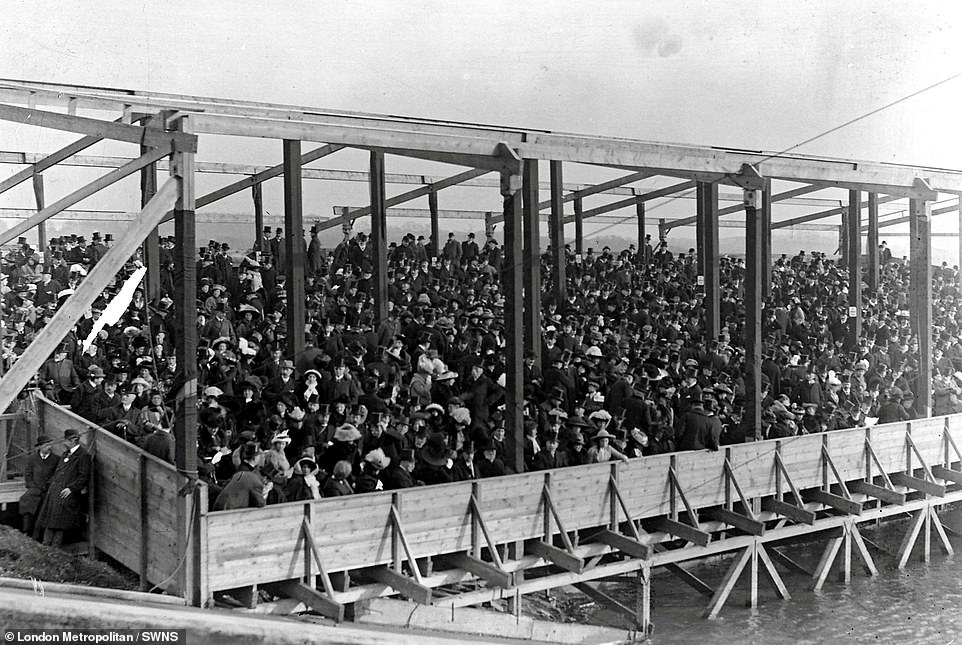 Hundreds of people turned up for the opening of Chingford Reservoir in 1912 with men donning their best black jackets and women in bonnets and white scarfs, with them all squeezing into a seating stand (pictured). The Chingford Reservoir is the collective name for the King George V and William Girling Reservoirs

A Guy Won’t Stop Photoshopping Godzilla Into His Travel Photos, and It Makes Them 10 Times Better