Commuter chaos as Arctic blast brings ice, sleet and up to six inches of snow to parts of UK with temperatures plummeting to -4C

By Terri-ann Williams For Mailonline

Commuters across the UK will be hit by chaos this week as an Arctic blast brings ice, sleet and up to six inches of snow to some parts of the country.

Forecasters have warned that temperatures could plummet to -4C in some parts and several yellow weather warnings are currently in place.

The cold air overnight managed to bring snow, sleet and rain across Scotland and England’s north-west.

This morning cars in the Carnwath area of Lanarkshire were seen covered in snow as commuters got out to clean their car windows. This is while lorries on the M6 near Cumbria were seen travelling along as snow continued to settle around them.

The air that has pushed south from Greenland ensured a low of minus 4C (25F) was recorded on The Cairnwell mountain in the Eastern Highlands, the Met Office‘s Helen Roberts said.

The cold air combined with a band of precipitation to produce sleet and snow, as well as icy patches, which could prove problematic for those in cars and on trains, the forecaster added. 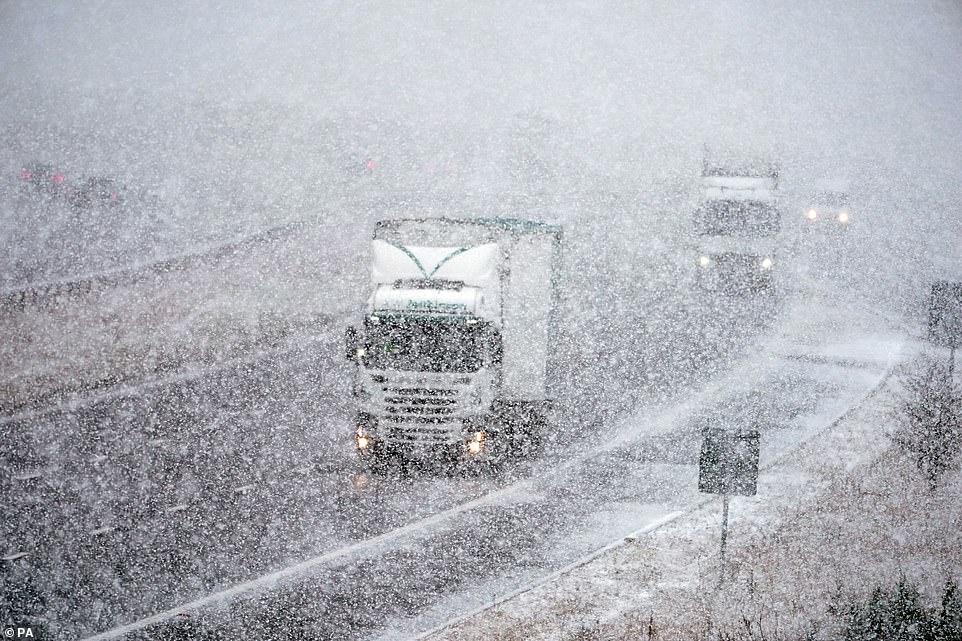 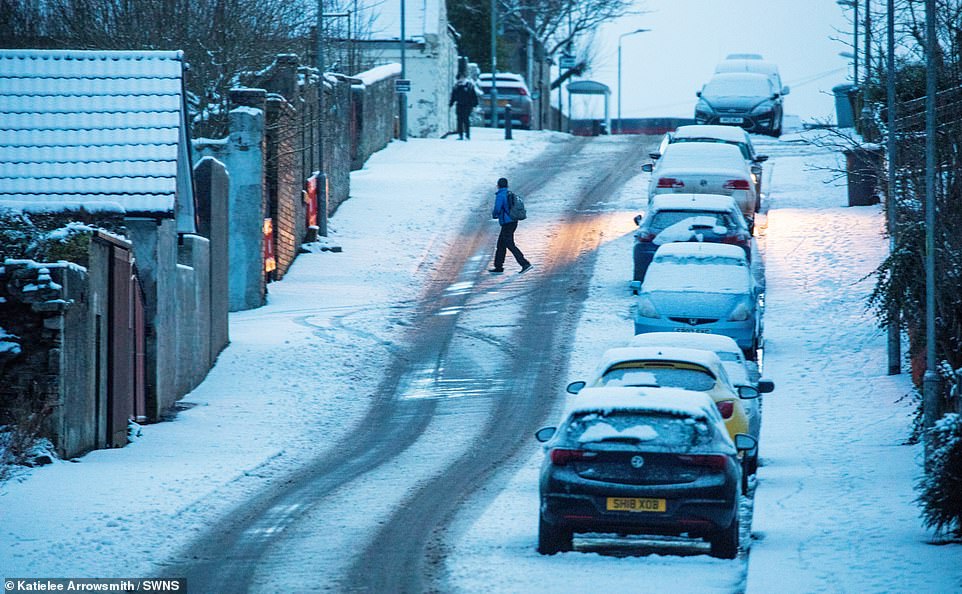 Commuters are being warned of travel chaos from ice and snow across Britain today, with three weather warnings having been issued by the Met Office, snow above in Lanarkshire 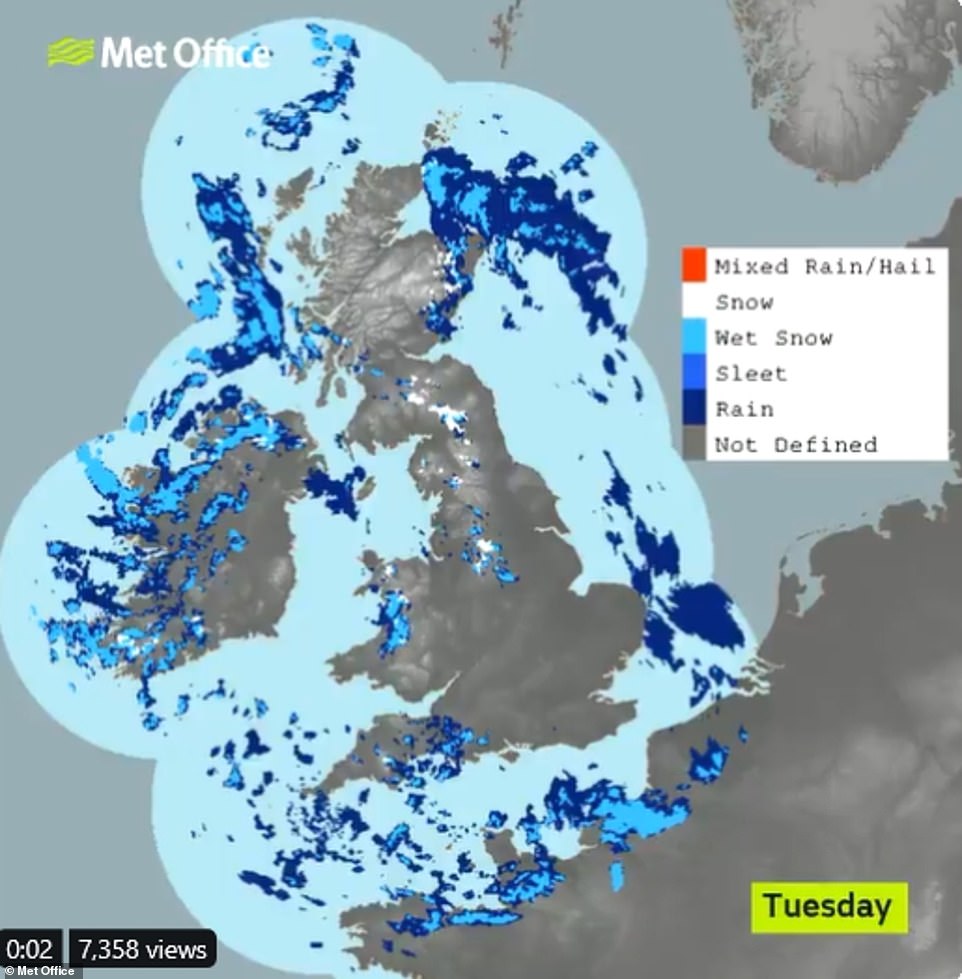 The latest snowdar shows last night’s rain, sleet and snow clearing Scotland, but there will be snow on the ground in parts of the north this morning, with ice in places too, the Met Office said 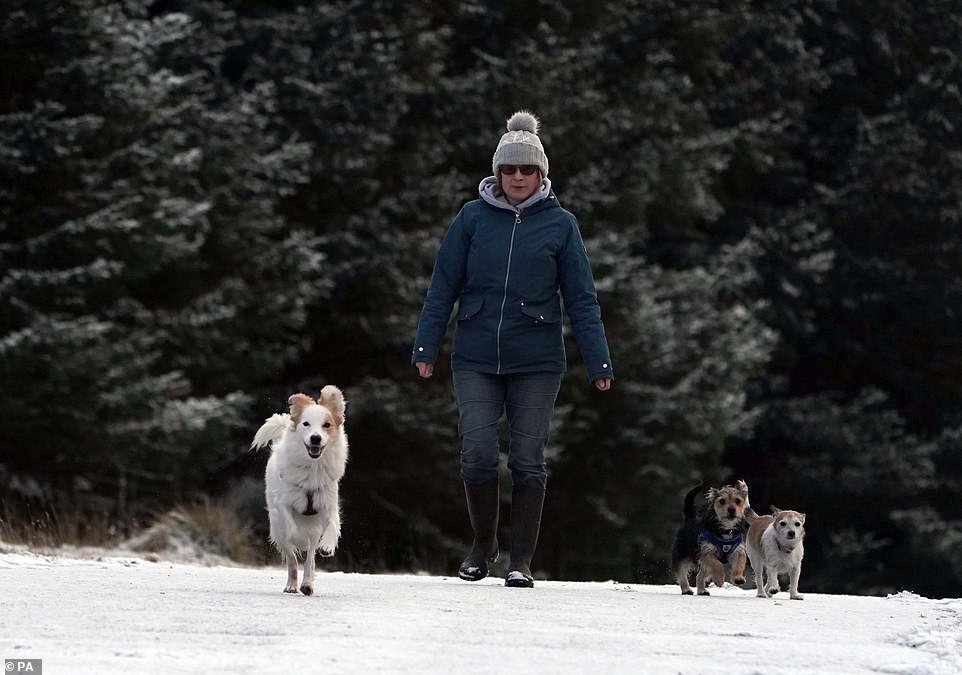 Walking in a winter wonderland: This woman and her three excitable dogs were seen walking together today in Shap Cumbria

‘It’ll be an icy start for many, with a widespread frost and temperatures dipping just below freezing,’ she said.

Up to 5.9 inches of snowfall has been predicted in some places. Snow and ice warnings are in place in parts of Scotland such as Inverness and Glasgow.

This is while ice warnings are also in place in across Manchester and into the Midlands, as well as some parts of Aberdeen.

As well as this, 35 flood alerts have also been issued across the UK in places such as the Lower River Loddon and the West of Dorset. 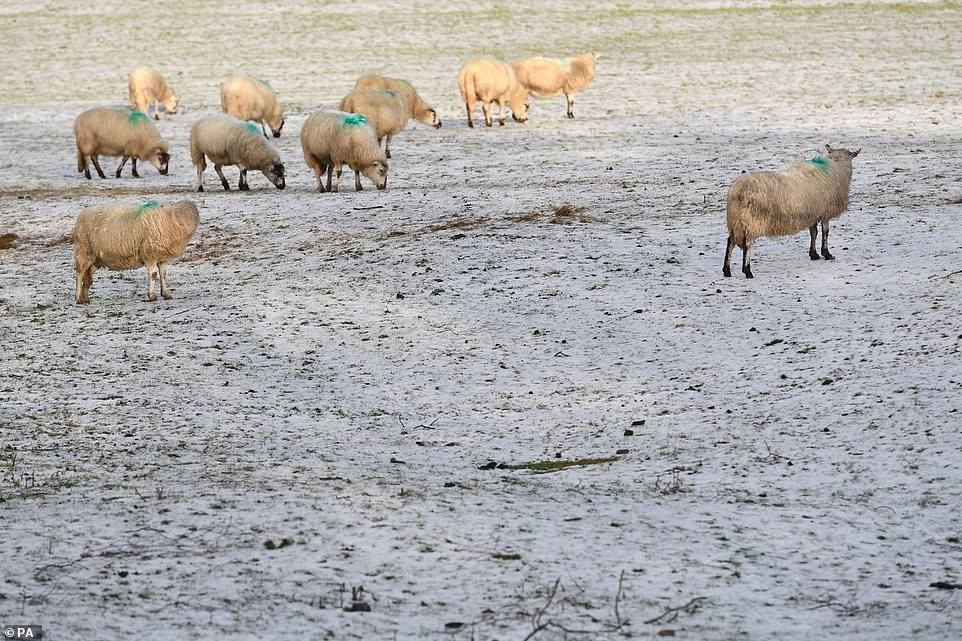 Have you any wool? These sheep will be glad of their furry coats as they stand in a field in Wales today which, where snow had settled on the ground 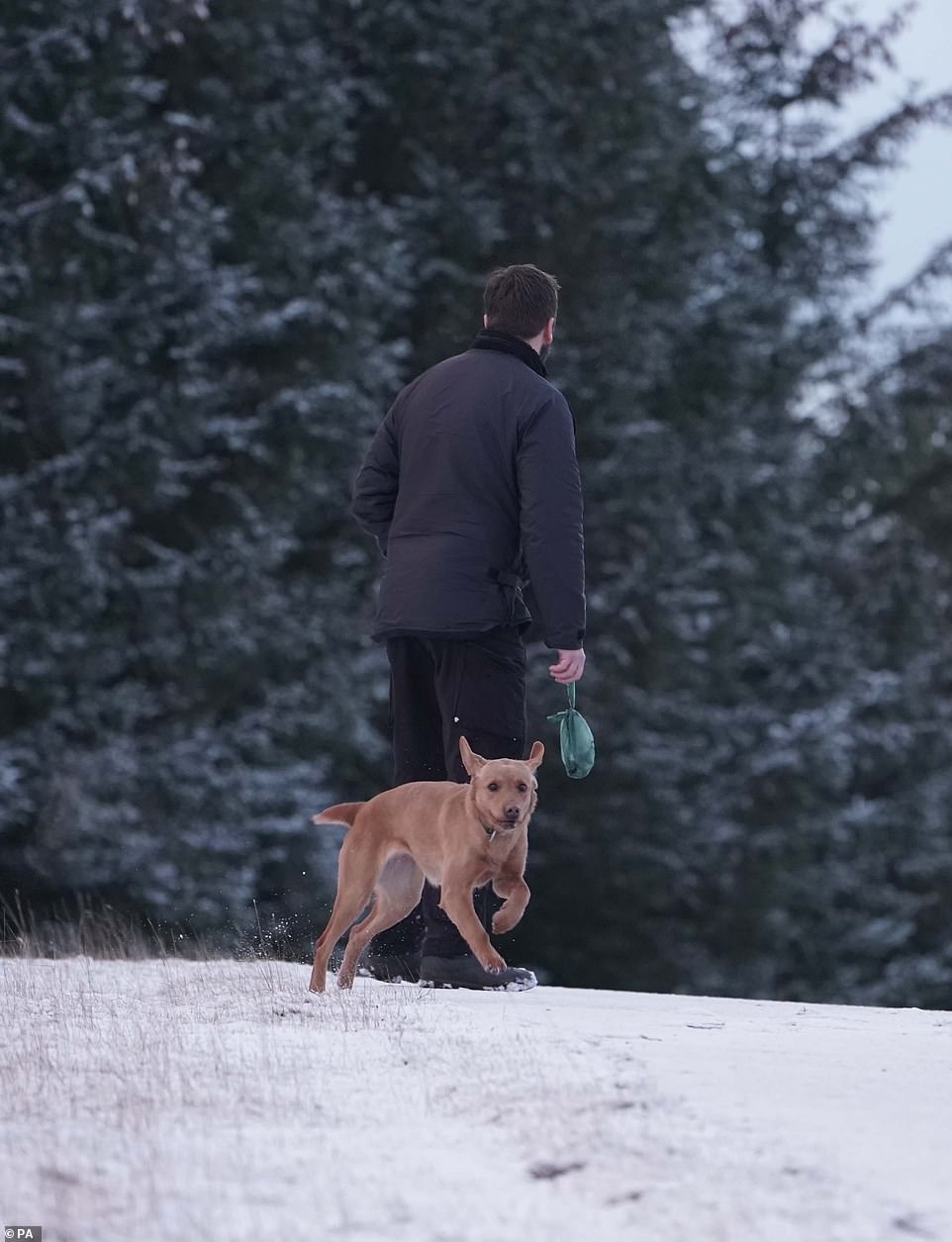 A man walks his dog near near Shap in Cumbria as snow settles on the ground in after it was forecast for the highlands and high-level areas of northern England, where yellow weather warnings are in place 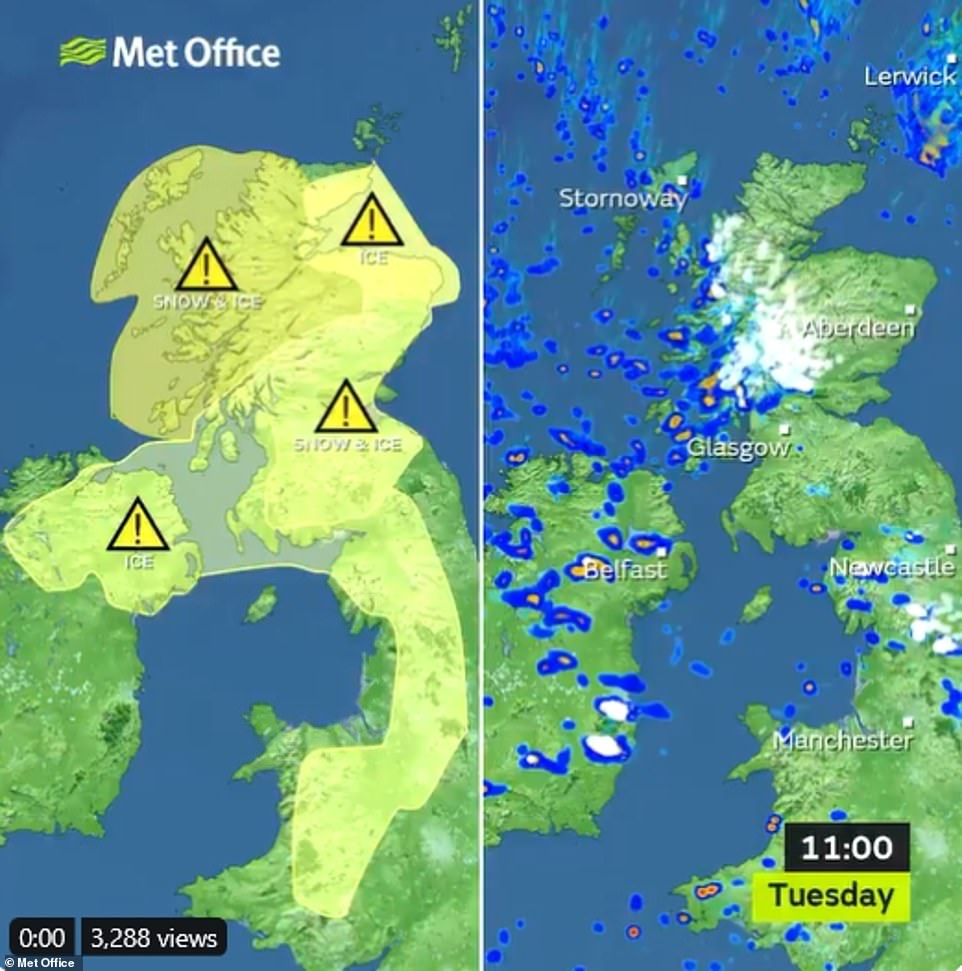 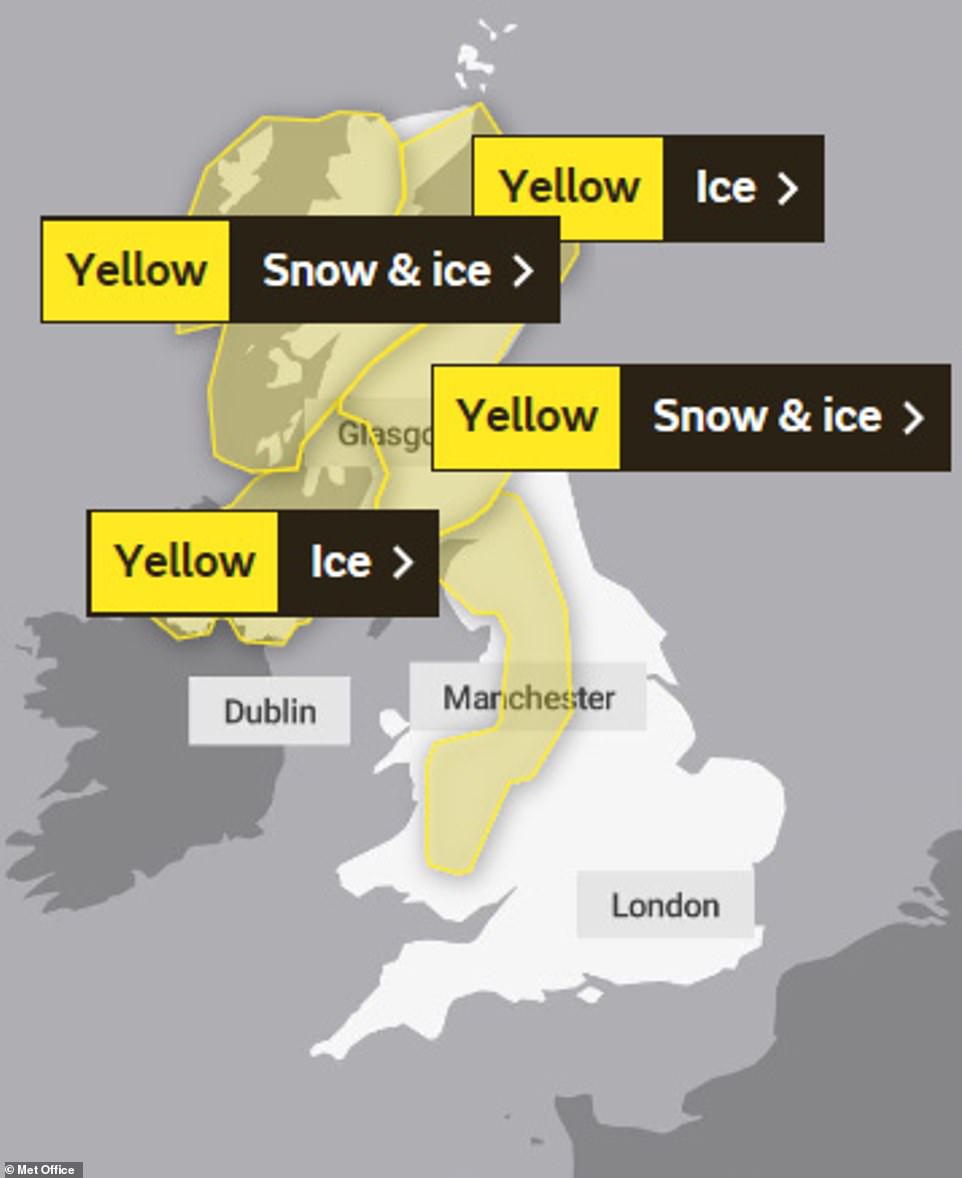 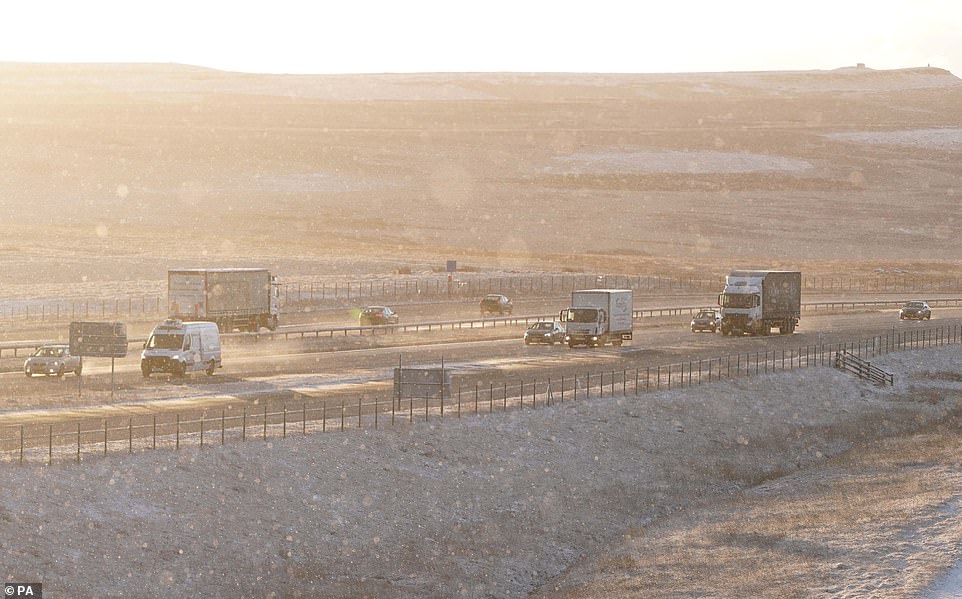 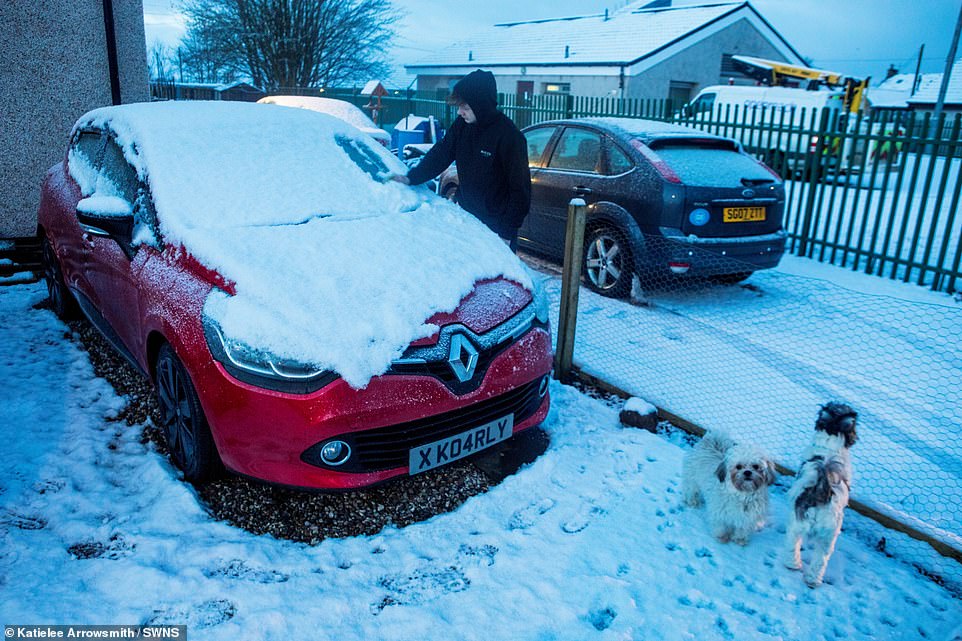 Walkies! Two cute pooches are pictured above in Lanarkshire as they wait for their owner to clear the car in the snow

About 750 road-gritting lorries – 500 in Scotland and 250 in England – are ready to be deployed, the Daily Mirror reported.

Showers are expected to arrive in western England and parts of Wales later in the day.

‘But it will be a largely dry day in the eastern and central parts of the country,’ Ms Roberts said.

The yellow warnings will expire between 10am and 11am.

The UK is in the middle of a wintry spell, with milder weather arriving on Wednesday. 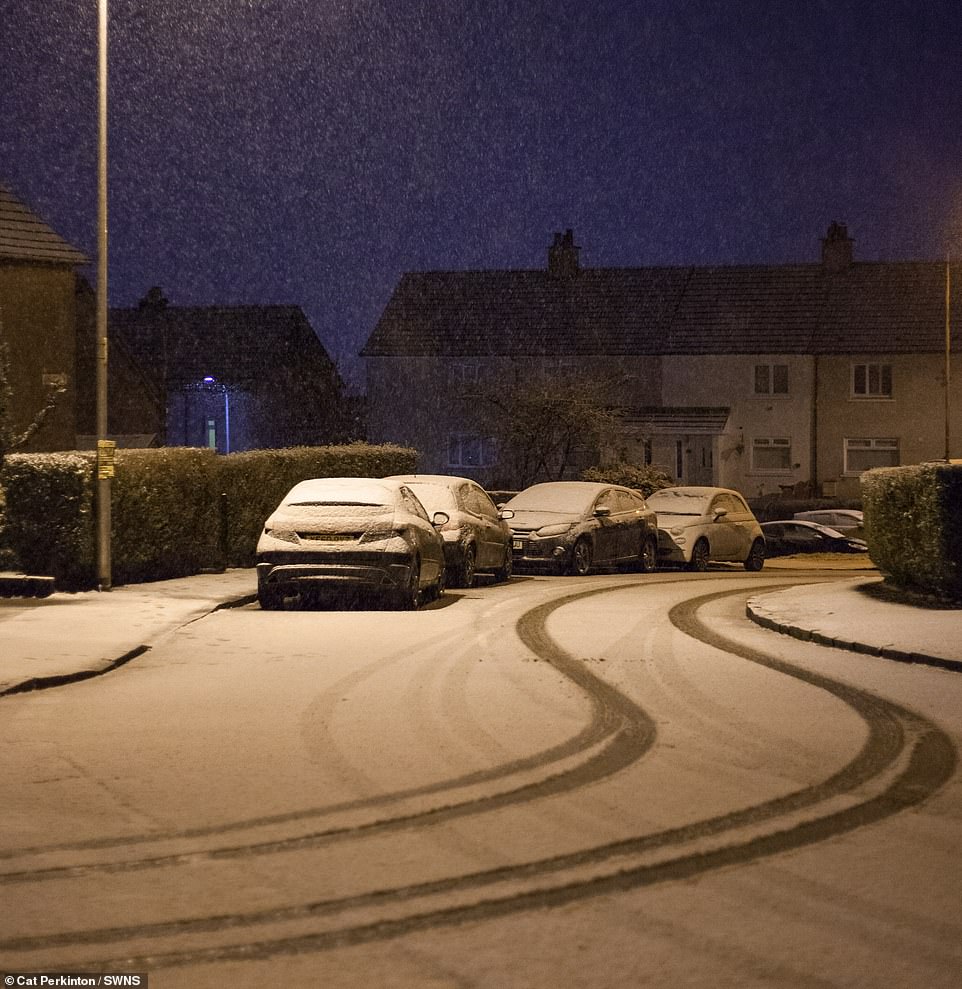 Coronavirus deaths in the UK almost double overnight to 21